They remain a driving force in Aulander, working tirelessly in an effort to better their town, their community and their region.

The Aulander Ruritan Club has become synonymous with recreational activities for children because of their hard work and dedication in restoring what is now known as the John Asa Drew Field of Dreams. 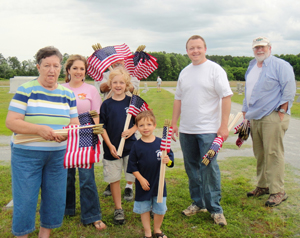 As a tribute to those brave men and women who served in branches of the American armed forces, members of the Aulander Ruritan Club place American Flags each year on the graves of military veterans. Performing that task last year were, from left, Judy Hughes, Karla Cooke, Billy Drew, Alden and Hayden Cooke, Larry Cooke and Turk Askew. Contributed Photo

Club President Billy Drew said he believed the members of the organization were just average people who simply wanted to make a difference in their community.

“We want to make things better in our home town and our surrounding areas,” he said. “Our club membership is split almost 50-50 between Aulander and Millennium which is both Bertie and Hertford counties. We try to do as much as we can to help people in our area.”

The Aulander Ruritan Club was the fourth such club formed under the Ruritan umbrella in North Carolina and was chartered in December of 1938. Local businessmen and farmers came together and saw the need to form the organization and work to improve the quality of life in Aulander and its surrounding area.

In the years of its existence, the club has been involved in Boy Scouts, Little League baseball, youth dances and recognition of war veterans, firefighters and EMS personnel.

Each year, the club offers a $500 scholarship to a worthy graduating senior of Bertie High School or Hertford County High School.

All of that began very early with the club. In its formative years, the Aulander Ruritans combined with the Women’s Club to make food baskets and collect toys for needy families in the Aulander community.

The group also saw one of its own – John R. Jenkins, a founding member of the club – become active in the Ruritan Club nationally. He was the keynote speaker of the 1948 National Convention and served as National Vice President.

Unfortunately, he didn’t serve as National president because he joined the armed forces and served in World War II.

The early spirit Jenkins and other members showed inspired the current club to continue their ways of service.

In 2007, the club members undertook one of the larger projects in its history – restoring the old Aulander ball field to a usable condition. It took thousands of man hours to finish the project.

Through hard work, dedication and fund raising from the local club members, the field was restored and was dedicated in honor of John Asa Drew, who was known for his love for youth and for baseball.

Shortly after the field was completed, the Aulander Ruritans started the Aulander Youth League and organized baseball and softball teams to compete during the summer months.

Last year, more than 150 youngsters were part of the summer program which remains one of the largest projects undertaken by the club.

“They love it to death,” Drew said. “(My wife) Kathy and I can be in the aisles of the grocery store and hear someone holler ‘uncle Billy’ or ‘aunt Kathy.’  I think it’s a good deal when you walk around away from the ball field and the kids still come up to you.”

In addition to the Aulander Youth League, the field can be used for family fun days, outdoor concerts, turkey shoots and an endless number of events.

While the baseball field project was the most ambitious undertaken by the Ruritans, it was by no means their only way of reaching out to the community.

For many years the group has been involved in providing Christmas boxes to the elderly and needy. Approximately a dozen boxes are prepared each Christmas by the club and include food and other items to help celebrate the holiday. Some of those boxes also go to Roanoke-Chowan Hospice.

In addition, the group has built several handicap ramps for those in need.

“We try to help anyone who needs the ramps in our area,” Drew said. “We have done several in the Aulander and Millennium area.”

The club has also been part of several beautification projects. They include street planters, the flag pole at the community building and the John Asa Drew Field of Dreams entrance. They also provided shutters for the Aulander Public Library.

They have also assisted in improvements to the town by donating equipment or supporting funds.

Funds have also been donated for Relay for Life, youth camps, schools and other worthy causes.

Drew said he has loved being part of the Ruritan Club and that it has become a big part of his life.

“It practically took over my life,” he said. “I have thoroughly enjoyed it. I’ve had the opportunity to meet people that I never would have met any other way. Seeing the smiles on the faces of young people and older people when you’re able to do something to help; what’s better than that?”

The Ruritans as an organization are about helping others and making each community they serve better by raising the quality of life for its citizens.

“A Ruritan is an individual who believes in God, country and fellowman,” Drew said. “They have the drive to improve the way of life in their communities. Whether it is building new or restoring the old, we attempt to do what is best for the citizens, bringing people together in fellowship and improved understanding.”

He said that the group believes strongly in doing whatever can be done to help in the community.

“Whatever anyone comes up with, we try to do as much as we can,” he said.

The Aulander Ruritans have been doing as much as they could to help for over 70 years and are continuing to aid the communities of Aulander in Bertie County and Millennium in Hertford County. The love they have for the communities in which they live make the group as a whole one of the best citizens in our region.

Ruritan National has nearly 30,000 members throughout the United States that work to improve more than 1,100 local communities. Since the organization’s beginning in 1928, Ruritan Clubs have served America with fellowship, goodwill, and community service.

Ruritan is a civic service organization made up of local clubs in urban areas, small towns and rural communities.

Ruritan’s purpose is to create a better understanding among people and through volunteer community service, makinge America’s communities better places in which to live and work.

The slogan of Ruritan is “fellowship, goodwill and community service.” Club membership represents a cross-section of the community in which the club serves, and is not restrictive with regard to occupation, social position or any other specific criteria.

Unlike most civic service organizations, Ruritan rarely has national programs. Rather, each club surveys its own community as to the needs of that community and then works to meet some of those needs.

Tubman springs back to life

JACKSON — The voice and legacy of Harriet Tubman will once again come to life. On Friday, renowned storyteller Joyce... read more