If you’re a youngster in Northampton County it’s just the place to be.

For years the Northampton County Cooperative Extension Service has offered various activities through the 4-H program to empower children and teens ages 5-18 with the life skills they need.

In their pledge, 4-H’ers promise their head to clearer thinking, their heart to greater loyalty, their hands to larger service, and their health to better living for their club, community, country and world. From community service projects to public speaking activities to animal rearing skills, the Northampton County 4-H Program has strived and succeeded in giving young people an outlet to create who they want to be. 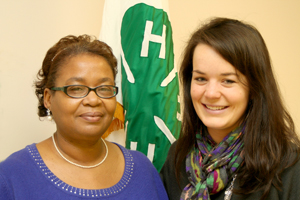 When it comes to the success of 4-H in Northampton it comes down to a simple formula: two equals one. Caroline Brown, 4-H agent, and Ann Lawrence, 4-H associate, carry out the mission of the program in the county.

“I was a volunteer there and I worked with 4-H and a couple other programs grant related,” she said. “So I’ve been a part of Cooperative Extension for about 18 years.”

Lawrence headed a 4-H Club for teens for three years. Though she wasn’t a 4-H’er growing up, it was her own work with the program along with her children’s involvement that she decided to devote her time to 4-H.

“I tell young people today to volunteer because you never know what can come out of it–a job–like for me it did,” she said.

Brown grew up in Northampton County just 10 miles from the Extension office.

“I participated in the Livestock Show when I was little, raising lambs and loved that experience,” she said. “I did the show for three or four years. It was a 4-H Livestock Show, but I didn’t realize 4-H offered other things. I’d just do the show each June and then that was it.”

After graduating from college in Kentucky, Brown returned home and applied for the open 4-H agent position. She was hired in January 2009.

“I’ve been real happy to be here for the past three years,” she said.

When it comes to getting things done around the office, Brown and Lawrence are a dynamic duo, ready to tag team on any given chore as varied as they may be.

“Our job is so wide, it’s hard to describe sometimes,” Lawrence said. “How much time do you have?”

Lawrence said Brown is typically the organizer of the two. Brown said she often deals with the technical aspect of the job like paperwork.

On the other hand, Brown said Lawrence is more of the go-getter and is out in the community, going to the schools.

Brown stressed it’s not just the two that make the program work. It also includes others in the community.

“Ann and I work together, but it’s no one person,” Brown said. “We’re thankful for the team here on staff and also the cooperative extension office that helps us, all the 4-H members and their parents, volunteers, businesses and individuals from the community that support it. …4-H is really a community program.”

When it comes down to it, friendship, mutual respect between Brown and Lawrence and their love for the 4-H Program make their working relationship click.

“It’s very rewarding working with Caroline, it’s awesome,” Lawrence said. “I get a chance to do things I enjoy doing in life.”

“It’s really a blessing we work together because not only do we enjoy each other, we’re just friends, but then our strengths and weaknesses really help each other,” Brown said. “That is huge for me to get to work with her and have that kind of relationship.”

Not just about agriculture, animals

Typically when people think 4-H, images of the Northampton-Hertford 4-H Livestock Show and Sale held in Murfreesboro each year often come to mind.

That annual event is just a taste of what 4-H offers.

Before they delved into the world of 4-H, Lawrence and Brown knew just the “tip of the iceberg.”

“As I have been working here I’ve learned it’s a really huge program,” Brown said. “My little perspective was that it was the Livestock Show, but as an agent here I’m learning that it’s summer camp, teen retreat, school enrichment, 4-H Clubs, presentations, all sorts of stuff. I’m learning 4-H is a huge world.”

Brown said 4-H can be described as a youth development program that offers just about everything a child is interested in.

“I’ve heard it described by another 4-H agent in different county as a salad bar, that there’s lots of different toppings you can put on your salad, and you can put whatever you want on there,” Brown said. “We do everything from science and technology, we have robotic competitions even on the national level to (being) down in a pig sty raising hogs for the livestock show,” Brown said.

Brown said each 4-H program in each county differs in its activities as the program is often tailored to the needs of that county.

“It’s to suit the needs of those citizens in that county,” she said. “We try to offer what the people want.”

Lawrence and Brown also receive guidance from the Northampton 4-H Advisory Leadership Group, which is made up from individuals from the community, as well as the Youth County Council, comprised of teenage 4-H members from around Northampton.

Lawrence works with the school enrichment program which brings 4-H into the classrooms of public and private schools.

“Everything is researched based and it’s broken down so that (it fits into) school curriculum and common core standards,” she said.

Brown said everything is developed by North Carolina State University which utilizes its affiliation with Cooperative Extension Offices to distribute that information.

“Our mission then is to bring that researched-based information material to the people of North Carolina,” Brown said. “This is one way we do that.”

Astronomy, solar energy, insects and embryology are just a handful of topics school enrichment covers. Teachers are provided material and trained to implement the program in schools.

“The whole thing about 4-H curriculum is that it is based on experiential learning and hands on activities,” Brown said. “It’s not, ‘Well, here’s another text book.’ No. It’s, ‘You’re going to have baby chicks in your classroom’, so it’s a hands on thing.”

There are also incentives like the 4-H Scholarship programs offered to 4-H’ers as well. Brown said another program offered in Northampton is ARIE (Application, Resume, Interview and Essay).

“Basically it’s a way to help prepare children for college applications or job interviews,” she said.

The participants have to go through an interview with an adult professional, they have to create their own resume of what they have done in high school and in 4-H, write an essay on a certain topic and fill out an application.

“This all happens in July at 4-H Congress. The winners are invited to go to a national trip and then there is also an international trip they can take,” Brown said. “We try to give good incentives to help encourage them to do these things because it really helps them in having this practice in 4-H as they go through life.”

Some other programs offered through Northampton 4-H include summer camp, the Cooperative Leadership Camp and District Activity Day where the children (ages 5-18) practice their public speaking skills in a competition.

“I have seen some of the older 4-H’ers, they’ll come back for Achievement Night (an annual banquet where members and volunteers are recognized) and I think it’s neat to see them and the confidence they have and they attribute it to 4-H,” Brown said.

Community service is a staple in 4-H through various projects organized by the program. Four times a year Northampton 4-H participates in a litter sweep; each month they volunteer at the Food Bank of Albemarle food distribution at the Jackson United Methodist Church; local 4-H clubs have made teddy bears and donated them to Vidant Roanoke Chowan Hospital and 4-H’ers annually volunteer at the Red Cross Blood Drive in Jackson.

“We encourage them to participate (in those volunteer activities),” Lawrence said. “It gives so much to the recipient as well as them. It shows them it’s just not about them, but others in need.”

Now sophomore at Fayetteville State University, Green first got involved in 4-H while in 5th grade.

“We had program Junior Master Gardener program funded through the Extension Office,” he recalled. “Basically we built a garden in the front of the school and grew tulips, butterfly bushes, put up bird feeders and bird houses.”

“I did almost everything they offered,” he said. “(4-H) has given me many opportunities to meet new people and learn things and taught me a lot.”

Green said those public speaking skills have come in handy at Fayetteville State.

“Yes, it has impacted my life,” he said. “It has helped me succeed, open my eyes to things I never knew about before and also shaped me into a better citizen.”

Green encouraged young people to utilize 4-H to their advantage.

“I would tell them to get involved as soon as possible, it’s not just about agriculture,” he said.

It’s stories like Green’s that are music to Lawrence and Brown’s ears.

“My personal hope, and Ann’s too, our goal is to love on these children, to nurture them and help them to grow and develop into good, outstanding citizens,” Brown said.

Brown and Lawrence said they feel those programs and activities offered through Northampton 4-H are making their impact on youth throughout the county.

“I would like to see more children involved,” Brown said. “I think one of the draw backs of 4-H is that it is so broad it’s hard to put it in a nutshell and market it.”

Lawrence agreed with Brown’s sentiments and also wished more parents would be more active in 4-H, perhaps by volunteering for the program.

“I do a lot of the school enrichment activities and a lot of the young people get excited and all that and we’re hoping that the excitement would go over to the parents,” she said. “It makes the children want to do it more if the parents are there.”

Teamwork, responsibilities, compassion toward others and tolerance for others are attributes Lawrence and Brown said can be learned through 4-H.

Certainly, all worthy attributes of a person at any age.