No one shouts “Move that Bus!” for Chris Couch.

Unlike the television show, “Extreme Makeover”, where home renovations, often including a new house built from the ground up, are provided for the less fortunate, Couch doesn’t have a bullhorn, endless resources, an army of volunteers, or a cheering section.

But what he does provide for Gates County residents through the “Faith Community At Work For Safer Housing” is, well: priceless. 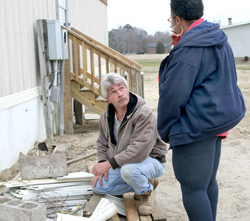 Chris Couch works in Gates County to improve the living conditions for the county’s citizens, including Calcy Eason (standing) whose refurbished mobile home in the Sunbury community is nearly ready for occupancy. Staff Photo by Gene Motley

A native of Hickory in western North Carolina, Couch has worked at a little bit of everything in his lifetime: auto mechanic, sheet metal worker, and crane operator, among them.

Two and a half years ago he was working at the Newport News Shipyard when he became a victim of lay-offs.  Through his church, Eure Baptist, he had worked on several volunteer assistance projects in eastern North Carolina and felt he was ready for a new “calling” in life.

“I have lived in Gates County for the past 17 years,” the soft-spoken Couch says as we ride out to one of his nearly-completed projects in his SUV filled with tools and materials. “And I’d always wanted to do something to help the elderly in our community as a volunteer.”

“What I do has made me feel fulfilled because I feel God is using me for his purpose,” he added.

Financially, his new job is miles away from his old ones, but he adds with a smile that he has no regrets.

“We (the Housing Committee) take applications from the totally disabled, I go out and evaluate to job of what’s needed and bring that information back to the housing committee,” Couch said. “We meet once a month, I inform them what’s needed and we vote on what’s needed for each different situation.”

“We process this,” he adds, “and try to get help to the people in the way that’s quickest and most efficient. I feel like I’m helping the vulnerable of Gates County.”

Colleen Turner, Gates County’s Department of Social Services Director, is also co-chairman of the Housing Committee formed thru the local faith community. Among the committee’s 24 members, she points out some 65 Gates County churches are involved in some way along with church pastors, other agencies, the Albemarle Commission, and community volunteers.

The housing committee has been around for over five years.

“Unfortunately, we haven’t taken any new applications in a year because we haven’t had the resources to meet the need,” Turner noted.

Part of the necessity may be because there is no Habitat For Humanity in Gates County and the U.S. Department of Housing and Urban Development (HUD) has stringent regulations, particularly with manufactured housing.

While permits and inspections are required by law, and everything must be up to code, the volunteer contributions include everything from manpower to building materials and in one case, an older manufactured home that was completely free of charge if it could be moved from its then location to the new home site.

“He’s done a great job of building partnerships, not just with the faith community, but also with businesses and organizations to donate money, materials, and even in some cases, labor and equipment,” Turner said.

“It’s not just the faith community, but also agencies that offer services to the elderly, the disabled, low income families with small children, and others in need,” Turner added.

“Since he joined us he has helped an elderly gentleman who had never lived in a house with indoor plumbing experience the joy of flushing his first toilet; or there was the 75-year-old man who is legally blind that received new flooring in his home,” Turner said.

She added, “This has not been a salaried position. He walked away from some very lucrative jobs to serve his community. Faith drives his work.”

When VISTA (Volunteers In Service To America) ended in May of 2011 there was a fear that Couch’s involvement might end with it.  However, thanks to a Community Development Block Grant he’s been able to continue.  But donations are needed beyond the grant.

“We’ve gotten more done in the last year and a half with Chris Couch than in those first three and a half years combined,” Turner observed.

The Reverend Henry Jordan, who is a Gates County Commissioner and pastor of Mt. Moriah Missionary Baptist Church, is the other co-chairman of the Housing Committee.

“We would not be where we are without him,” Jordan stated. “He goes and gets materials and donations to complete projects.  He’s tirelessly committed, a person of faith, and we are blessed to have him.

“The county puts in no money directly for his services, but we have been helped with stipends,” Jordan added. “Chris provides direction and resources, does the assessments, repairs, and co-ordinates volunteers. What he receives is not compensable to what he’s worth.”

On an overcast Friday afternoon, Couch drives out to one of his projects in Sunbury that he hopes is only days away from being restored to occupancy.  It’s a mobile home with only a few loose ends to be taken care of before inspection.

“This trailer was actually donated by a man in Corapeake,” Couch points out as he climbs the newly-built wooden steps to a new porch and to the front door. “All he wanted was for us to remove it from his property and through connections we were able to get volunteers to offer time and transportation to get it moved here.”

Calcy Eason, the homeowner, arrives.  She suffered a stroke over 10 years ago that left her partially paralyzed and since the destruction of her old home on this site more than two years ago, she and her family have lived with relatives.  She is looking forward to the completion of Couch’s work.

Couch checks on a few structural items inside and out and pronounces the domicile ready for occupancy.  However, the final word must come from the county building inspectors.

“They (the inspectors) came out Monday and indicated what still needed to be done,” Couch said. “We completed it a day later, and hopefully when we clear the remaining trash away Calcy can move in before the end of the month.”

While there may be few new projects, Couch still has a couple of others to complete: one in Gatesville and another in Gates.  He’ll go about gathering volunteers, materials and resources, and working on toward finishing.

“It’s all God’s doing,” he says driving away from the trailer site. “I can’t take credit for miracles.”

By Cecelia Jones As is often the case for those born and raised in rural northeastern North Carolina, we often... read more