As is often the case for those born and raised in rural northeastern North Carolina, we often overlook what’s within our own backyards.

Perhaps that’s a normal occurrence as we tend to take things for granted. Because we see the same people, places and things nearly each and every day, we tend not to notice certain things — unique details and places that, together, form the intricate tapestry of our hometown — until they started to change. 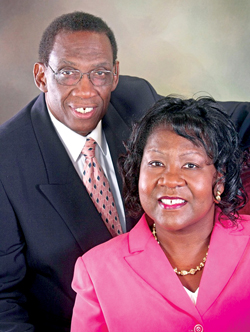 Dr. Daniel Smith and his wife, Eva, operate the Ahoskie Christian Center....not only a church, but a daycare and after-school child care facility as well. Contributed Photo

We have driven past the picturesque white structure that houses the Ahoskie Christian Center hundreds of times. It stands stately on the corner of McGlohon Street and Church Street in downtown Ahoskie.  But over the course of the past 20 or so years, the building that rests on 309 West Church Street and subsequently the surrounding buildings have experienced great changes, renovations, and rebirths.  These physical changes and restorations to the structure of the Ahoskie Christian Center itself are obviously noticeable, but perhaps the greatest developments are not just the ascetically pleasing ones. The meaningful, yet sometimes unnoticed occurrences and advancements that extend and resonate from the Ahoskie Christian Center throughout the community can be attributed to the efforts and ideas of Dr. Daniel Smith and his wife Eva.

Dr. Smith is a native of New Orleans, Louisiana. He notes on his upbringing, “I don’t think any childhood is typical.  I was born and raised in the housing projects in New Orleans.  I was raised by a grandmother.  There were 15 of us — a big family.”

He remained in New Orleans until the age of 17, at which point he joined the United States Navy. Over the course of the years he obtained an undergraduate degree from National University in San Diego, California, a Masters of Business Administration from Golden Gate University, and an honorary doctorate degree from St. Thomas Christian College.

“I’ve spent a lot of time on the west coast,” Smith notes of his experiences.

In 1986, Smith retired from the Navy and moved to Ahoskie.

“Nobody decides to come to Ahoskie. You’re either born here or God brings you. I came here to be the business administrator for a church on a volunteer basis,” Smith recollects.

He continued, “This is an unusual place here — it’s a small county. It’s the smallest place I’ve ever lived.  Next to this, the smallest place I’ve ever lived was the Island of Guam and it’s 97,000 people on that island and it’s only about 15 miles wide and 30 miles long.  To come to Hertford County with 23,000 people in the whole county was a little culture change for me.  It’s been good for me.  I like to believe that I’ve been directed by God.  God knows what’s best for us.”

Tragedy struck the Smith family not long after they moved to the area.  Smith remembers, “My first wife died about fou years after we got here and we had four little ones.  God gave me another wife.”

Smith remarried a Hertford County native, Eva Bazemore of Cofield, and together they began the Ahoskie Christian Center.

“Ahoskie Christian Center is a community ministry that my wife and I started in 1993 with the idea of being a catalyst for spiritual, social, and economic change in the community.  The center of that is a non-denominational Christian church and at present we have a childcare center that serves the community in that capacity,” Smith noted.

The building on Church Street doubles as the offices of administration, which are located on the top floor, and the afterschool program that consumes the bottom floor.  The sanctuary of the Ahoskie Christian Center is located at 209 NC Highway 42 West, adjacent to Garrett-Jones Funeral Home.

Although the heart of the Ahoskie Christian Center rests in the church, the Smiths and the Center are extensively involved in partnerships, missions, and various ministries throughout the community.

Smith states, “We like to do things just to reach out to the needs of the community.”

Some of those projects include the annual winter coat drive and involvements with the Ahoskie Food Pantry.

“This year, with the help of the community, we collected about 360 coats to give away to those folks that felt like they had a need,” Smith said.  “We’re also one of the major partners in the Ahoskie Food Pantry.  There are about five to six churches that really support that, and we’re one of them.  We help out with finances and human labor.”

In addition, Smith and the Ahoskie Christian Center host a free banquet every November for the area’s military veterans.

“It’s just to reach out and let them know that the community loves them.  We want to say ‘thank you’ to them,” Smith stated.

The Ahoskie Christian Center also partakes in an annual cookout at Chowan University that serves to welcome incoming freshman.

“I think last year had about 1,400 people in attendance.  We’re one of the major churches involved,” he stated.

“We try to make everything we do community oriented.  We welcome everyone,” Smith added.

“One of the greatest things we have contributed to the community is we’ve got about 13 people full-time employed between the daycare and the church and two part-time folks,” Smith stressed. We’re keeping people employed.  In this area, a rural area, it’s really hard to find a church that’s full-time, or going on all day long.”

He added, “We’ve got a lot of churches in Hertford County, over 80 of them.  A lot of them are led by vocational pastors that have other jobs. We’re the 9 to 5 folks.”

Smith stresses that the Ahoskie Christian Center is a place that is there for its parish and the community during the week, not just on Sunday mornings.

“The area offers a lot of opportunity for ministry, it really does,” Smith stressed.  “We’re in the middle of the poverty belt.  It’s the Bible belt, but the poverty belt as well.  Wherever you have that you’re going to have a lot of needs to minister.  Those needs are human needs, not just spiritual.”

The Ahoskie Christian Center is comprised of about 100 congregational members that partake in weekly Sunday services in the sanctuary.  The Center and the Smiths are deeply connected to those outside missions and community involvements, however the overall objective is spreading the Christian message throughout the area.

“Winning souls, that’s why we’re here,” Smith noted. “Everything else is just extra.  Our biggest goal and triumph in this community is reaching out and winning souls and teaching.  I’m a teacher.  We’re about discipling people and helping them grow in the Lord.  We feel like our biggest aim is to get people saved and then get them discipled.  That’s where we put most of our energy.”

He continued, “Everything is centered around the church.  The church is what we’re all about, but if we can reach out and help the community in other ways — meeting basic human needs — then we do that.  If all those other things had to go, that’d be fine as long as we can teach the Bible and help people grow in the kingdom of God.  That’s our focus. That’s our heart.”

Together, Dr. Daniel Smith and his wife have created a gem within the Roanoke-Chowan community.  Whether or not you are directly related to the Ahoskie Christian Center as a congregational member, employee, or customer, chances are you have been a part of something that the Ahoskie Christian Center and the Smiths have helped through their extensive community outreach, even if it is just by driving past one of their annual events or service ventures.

The changes and transformations that have occurred and continue to take place at 309 West Church Street in Ahoskie are changes for the better.  The combination of a big-city man and a Hertford County native, both dedicated to helping others, has proven itself to be a winning one.  Daniel and Eva Smith are continually enriching the Roanoke-Chowan area with their unwavering service and assistance.

They remain a driving force in Aulander, working tirelessly in an effort to better their town, their community and their... read more