When someone is in need, you do whatever is in your power to meet it.

That’s the belief that led Laura Hoggard to spearhead a 14-day effort to help those cleaning up from the April, 2011 tornadoes on the Askewville side of the storm damage.

“The morning after (the storm) we were headed to church and it was the first time I saw the devastation and total loss,” she said. “It was very humbling. It was shocking to see such total devastation and to see so many people who had lost everything.” 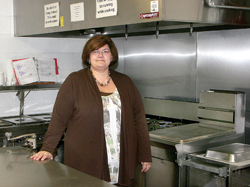 Laura Hoggard spent upwards to 16 hours a day in the kitchen at Askewville Assembly of God Church, helping to feed victims of last April’s tornado as well as those coming in from other areas to assist in the clean-up effort. Staff Photo by Thadd White

The effect of that loss was fresh in her mind when she arrived at Askewville Assembly of God and realized the Family Life Center still had electricity. That sparked an idea in her mind that started as a way to help for a day and ended up providing thousands of meals over a two-week span.

“Once we realized this building had power – and it was the only one we knew of that did – and had a kitchen and food, we thought we can at least feed the people,” Hoggard said. “There were already people everywhere in the area trying to help clean up, but the people who had lost everything had nothing to offer – not even a bottle of water. I thought we could help with that.”

She said that thought was due to her desire to help people in any way she could.

“When there’s a tragedy like that, you want to help however you can,” she said. “I couldn’t give a house, but I could help by working with other people to provide some food.”

Hoggard went to Askewville Pastor R.O. Denton Jr. and asked if she and others could prepare lunch and dinner that day for those who had suffered loss and the ones helping out in the storm’s aftermath.

“At that time we were going to fix lunch and supper,” she said. “We didn’t realize the outpouring of love and support that would take place over the next several days.”

On that first Sunday, with little notice or preparation, the volunteers fed 500 people at lunch and then another 300 that evening for supper. While the notice was short, Hoggard said the help was not.

When Hoggard realized how much was needed, she immediately began planning for the next day and started working to help put people in place to provide whatever services were needed.

In addition to designating people to take care of keeping a record of donations and someone to lead the kitchen, Hoggard was busy coordinating the effort so as to help meet as many needs as were possible.

“I was most definitely surprised at the amount of people that came out to help,” she said. “It was awesome. I knew we would be here to help our own, but to have people coming in from all over to help people they didn’t know, it was just a blessing.”

Hoggard, who was on hand for 16 to 18 hours per day for that two-week period, said Geraldine Todd was there just as much and was a great help in the entire process.

She and Todd began by making out a menu for the food that would be prepared – which had become breakfast, lunch and dinner – so that when people called and asked what they could donate, the volunteers knew.

Hoggard said meals were cooked by volunteers every day, but also was thankful for the two days Friends of Bertie provided the meals through Nixon’s Catering so the volunteers could do other work and only serve meals.

The serving of the meals wasn’t as simple as providing them in the Family Life Center, however, as a delivery system was set up to allow those working on their homes and the people helping them to have the meals brought to them.

“I was just one person doing what I could,” Hoggard said. “While I appreciate someone thinking I did something special (and nominating her for Citizen of the Year), there were many others who did just as much. I didn’t deliver a single meal. There were people who did that every day.

“It took a lot of people spending a lot of time and just loving on people,” she added.

Hoggard said she was proud of being a part of the effort and would never forget it.

As she looks back on her childhood, Hoggard credits much of that desire to help to her parents and the lessons they taught her.

“I grew up in a house with parents that if anyone needed anything, they were there,” she said. “I grew up seeing that and it made an impact. I thrive on being able to do something to help some else.

“Growing up with parents that gave sacrificially is where it comes from, I’m sure,” she added. “I just love to help people.”

Helping is something Hoggard has done far longer than just a two-week span in April of last year, however.

She has been involved as a Sunday School teacher at Askewville Assembly for nearly a dozen years. She teaches the teenagers at the church and said she tries to pass on what she learned in her early life at church.

“I had Sunday School teachers who made an impact on my life and I try to pass that on to my kids in Sunday School,” she said. “I try to teach them to have the heart of a servant.”

Hoggard said she has also tried to instill those values in her own children – the Rev. Webb Hoggard and Kelli Frazier – as they were growing up.

“It’s not about what someone can do for you in return and not about what you can get out of it,” she said. “Everyone needs help in some way and we need to do it not out of obligation, but out of love.

“I want them to help people and do it because they love doing it,” she said. “I don’t think people encourage a servant’s heart anymore.”

It was the servant’s heart instilled in her as a child that led to Hoggard’s heroic efforts during the two weeks in April. She said that time was rewarding and special, but it also took its toll.

“I still haven’t recuperated,” she laughed. “I think I almost had a mental and physical breakdown when it was over.

“During the time it was going on, God gave us the energy we needed,” Hoggard added. “It was like a special strength during those two weeks and that was exactly what we had to have.”

Hoggard said she was thankful to have the opportunity, however, and was mindful not only of those who were there helping, but the many that wanted to be, but couldn’t.

“I am thankful I could be there and be part of what happened,” she said. “There were many people who wanted to be there and help, but couldn’t because they  had jobs and had to go to work. I’m glad that I could.”

Despite all the work and effort she put in during those long days, Hoggard said she is no different than anyone else who was willing to help.

“I don’t think I did anything more than crowds of other people,” she said. “I just hope there was something I did that made a difference.”

Married for nearly 27 years to Manuel Hoggard, Laura has served as Church Treasurer, Sunday School teacher and leader of the Tweeners group during her 18 years of service to her church.

She has also been instrumental in leading the popular Kid’s Night Under the Big Top, a celebration held at the church in lieu of Halloween. The event regularly attracts hundreds of youngsters to the Family Life Center.

Hoggard has led the church Easter egg hunt, the Women’s Tea Social and Cupid’s Loft. In addition, she has hosted the women’s retreat for the church in her own home.

By Cecilia Jones   From her earliest memories, Kristina Cooper’s sick days that kept her absent from school were spent... read more