From her earliest memories, Kristina Cooper’s sick days that kept her absent from school were spent with her mother, Kimberly, in their Ahoskie home.

Those memories remain ever-present in Kristina’s mind, even though her mom is in a better place after losing a courageous battle against cancer. 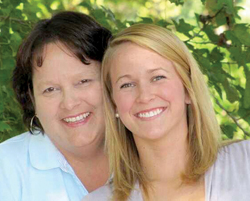 Kristina recollects, “When I was sick I would always want my Mom right there with me and she would never leave me.  She would take off work and cancel all her plans for as long as I was sick.  I loved having her there because she always made me feel better whether it was rubbing my back or just holding my hand.  She was the only one I wanted.”

This sick-day mother-daughter ritual continued until Kristina reached her twenties.

In April of 2007, the role of caregiver in the Cooper household would be alarmingly altered.  Kimberly Cooper, known to many close to her as ‘Kimmy,’ was diagnosed with a rare form of breast cancer.

“A few months before the diagnosis my family went skiing and mom fell and cracked her vertebrae,” Kristina remembers.

It was that fall that prompted trips to the doctor that would lead to the disheartening discovery.  Typical protocol was followed after the diagnosis—first surgery to remove the tumor, followed by radiation and chemotherapy.  Kristina, along with her father, Anthony, and little brother, Ben, provided support for Kimmy through every step of her treatments and despite the curveball that was thrown at the family, they remained steadfast and faithful.  Kristina and the rest of her family and friends were relieved with news that her mother’s cancer was gone in December of 2007.

Although the cancer was in remission, the threat of recurrence always loomed.  Despite the underlying danger, Kristina went on with her teenage life as normal.  She remained involved in her extracurricular activities.  She had a boyfriend, Miles Harrell, who she has been dating since 2004.  Kristina continued attending and excelling in high school and upon entering her senior year she decided to take on two major life changing endeavors.

Kristina, forever impacted by her mother’s recent battle with cancer, began her extensive involvement with Relay for Life, a volunteer-driven fundraising campaign that raises money for cancer research and patients, spreads cancer awareness, celebrates the lives of those lost to cancer, and honors those in the midst of their battle with cancer.

“We raised over $12,000,” Kristina recalls in regards to her first year’s involvement with her team.

Her second undertaking also happened that same year.  Kristina entered her first pageant and competed for the title of Miss North Carolina Teen U.S.A.  Competing against young women that had grown up in the pageant world, similar to the lives of those seen on the hit television show “Toddlers and Tiaras,” proved to be challenging.  Despite her preparations, her maiden adventure as pageant queen did not go as planned.

“I didn’t even place,” Kristina remembers.

Despite the fact that the first experience did not yield the outcome she had hoped for, Kristina was hooked.

“It really is fun and from then on, it was my new hobby,” says Kristina.

Both of these new involvements were not one-time undertakings as Kristina continues to be greatly integrated in each and much of her successes in both can be contributed to her personal strength and constant support from her family and close friends.

After her first attempt for the teen title, she, with the help of her mother and a pageant coach from South Carolina, prepared for the following year’s pageant.  The result of the 2010 Miss North Carolina Teen U.S.A. pageant spoke for itself. Kristina, competing in merely her second pageant, walked, or sashayed, away with the sash and title that declared her 3rd runner up.

Upon graduation from high school, Kristina began a nursing program with the hopes of eventually becoming a chemo nurse, however, devastation would strike the Cooper family again in August of 2010.  Kimmy, after a routine screening, was told that the cancer had come back.

“They found it in her lungs,” Kristina recalls. “At that time, the doctors gave her five months to live.  Obviously she outlived that.  From her lungs, it spread to her brain, her liver, and her bones.”

Kimmy’s body was overtaken by cancer and as it spread, the level of care and assistance needed also grew.

Kristina eventually withdrew from college to help care for her mother and assist the rest of her family.  The extra time together allowed their relationship to grow even further as Kristina would practice for her pageants with her mother’s attentive eye watching.

By the beginning of 2011, Kristina had reached the age in which she would no longer be eligible to compete in the teen pageant and instead would vie for the title of Miss North Carolina U.S.A.  Contestants must win preliminaries in order to compete for the state title.  In the pageant, the contestants are judged in three equal categories that include a personal interview portion, swimsuit competition, and evening gown.

Kristina began preparing in June for the 2011 Miss North Carolina U.S.A. pageant, which was held Nov. 11-12 in High Point.

“I have to prepare most for interview. My mom would tell me I get this nervous giggle during the questioning and I mess with my hair too much,” she says of her preparations for the interview portion of the pageant.

About once a month, Kristina would travel to Greenville, SC to work with a pageant coach that helped with her walk and stage presence.  She, however, accredits the physical training to herself. Kristina would spend four, five, or sometimes six days of the week attending various aerobics classes and conducting her own personal workout sessions.

“Swimsuit is a big part of the U.S.A. system.  I’ve heard that evening gown is the least important part.  Lots of girls spend thousands of dollars on dresses and mine was pretty inexpensive,” Kristina notes.

Kristina spent her summer and fall of 2011 not only training and preparing for her pageants but also spending time with her ailing mother.  She notes there would be good days and bad, but through it all her mother remained distinctly and unapologetically positive.

“Before going somewhere, I would ask my mom how my hair looked,” says Kristina.  She says that Kimmy would jokingly reply, “Honey, you’re asking the woman with no hair.”

The Coopers kept their sense of humor and good spirit no matter the circumstances, and the entire family, including Kimmy, who had at this point been too weak to walk, traveled to High Point in November to watch Kristina compete for the title.

“We had a little mishap the first day.  When mom got there, she fell out of the car and hit her head.  She immediately had to be rushed to the hospital.  Then entire time I was trying to contain myself,” Kristina recollects.

Although the pageant is a two-day event, not everyone competes both days.  Only a top percentage of the contestants from the first day get to advance and compete the second day.

“I was afraid that mom wouldn’t get to see me compete if I didn’t make it past the first day,” Kristina said.

The results from the first day read that Kristina made it into the finals and she would go on to finish the pageant in a top 10 position.   She was the youngest girl in the entire pageant that made the top 10 and her entire family, including her mother, who had been discharged from the hospital, and close friends were all in attendance.

By Thanksgiving, Kristina’s mother had been admitted into the hospital.  She continued chemotherapy, despite doctors concerns and warnings.  While others were busy Christmas shopping and making preparations for the holiday season, the Coopers were embracing their last days together.  Kimmy, who never complained throughout any treatment or hardship, created a to-do list before Christmas.  It included getting all of the Christmas shopping done, so she was taken to MacArthur Center in Norfolk and to Greenville, NC to complete her shopping.  Secondly, Kimmy’s husband celebrates his birthday on Christmas Eve, so he had never had a real birthday that Kimmy wanted.

“On the Saturday before Christmas, she threw him a surprise party.  She got to see all of their friends,” says Kristina.

On the Sunday before Christmas, Kristina, Kimmy, and Kimmy’s best friend, Sonya Trotman, prepared a Christmas dinner for the Cooper family.

The final item on the to-do list was as simple as a change of nail polish.  Kristina describes the color as the “ugliest color of green.”

By the early morning of Dec. 20, 2011, Kristina’s mother had significantly weakened and the hospice nurse had warned the family that the end was quickly approaching.  Sonya, Anthony, and Kristina took shifts staying awake with Kimmy through her final hours.

“She was still talking and understood what was happening around her,” Kristina remembers.

Kimmy was surrounded by those closest to her when she lost her battle to cancer.  A nurse, after noticing the odd choice of color on Kimmy’s nails, told Kristina that the unique shade of green meant eternal life.

“Dad thinks she went when she did because she didn’t want us stressed and as always, she had everything planned out,” says Kristina.  “I spoke at her funeral.  I wanted to share a few memories and leave a lesson.  Mom never, not once complained.  We should all enjoy our lives.”

The Coopers have carried on with their lives since Kimberly Cooper passed away on that December day at the age of 46.  Kristina still hopes to become a chemo nurse and her younger brother Ben, an avid huntsman, wants to become a sniper.

Kristina will remain involved with her two great life endeavors.   She continues to be a great part of Relay for Life and serves as Captain of the Kids Walk portion of the cancer awareness and prevention event.

Hertford-Gates Relay for Life will be held on April 27-28 at Chowan University in Murfreesboro.

Meanwhile, Kristina has not hung up her crown and sash for good either as she plans on competing for the title of Miss North Carolina U.S.A. this fall.

Kristina yearned for her mother’s attention and care in her early years. The times that her father attempted to take on the task of caregiver to a sick Kristina didn’t work.

“Mom tried to leave my dad home with me a couple of times but I would always end up calling her crying saying I wanted her to come home and she would,” Kristina recalls.  “Having her here when I’m sick is something I’m going to miss a lot.”

Although Kristina’s mother is no longer able to care for her loved ones, she instilled compassion, love, and at times, a streak of stubbornness in every life she touched. Kimmy’s legacy lives on through Ben, Anthony and Kristina Cooper.

As Kristina continues to make a name for herself as an activist and fierce competitor in the pageant community, our area should wait in excited anticipation for the things to come from this determined, strong-willed young woman.

Jo Hofler has a second life. No, she hasn’t come back from the dead, she’s just adjusted her daily working... read more