Jo Hofler has a second life. No, she hasn’t come back from the dead, she’s just adjusted her daily working activities after an early retirement that came a couple of years ago following 35 years with the family farm equipment business.

Since 2010 she’s “worked” as a community volunteer at T.S. Cooper Elementary School in Sunbury.  “Work” because she usually keeps up the 8 a.m.-to-3 p.m. hours of regular teachers five days a week, assisting with everything from tying shoes to tutoring to assisting at recess. 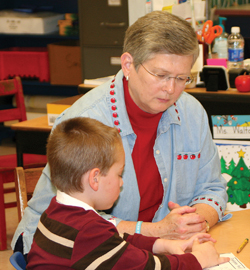 And according to her co-workers, what she brings to the classroom is priceless.

“She just goes around and helps everybody,” said Cooper kindergarten teacher Lisa Wilkins, who nominated Hofler for Roanoke-Chowan “Citizen of the Year”.  Hofler assists Wilkins’ class of pre-schoolers for a couple of hours each day.

“She keeps a schedule in her pocket,” she added, “and if something changes she just makes a note of it and changes it on her schedule.

“The other day we needed some popcorn for our school, and she rescued us and helped bag all that together for the kids so that every child could have some that afternoon.  And last week she brought in her own garden rake from home to rake the mulch on the playground underneath the swings so that the kindergarten students could reach the swings.”

‘Ms Jo’, as the students call her,” she continued, “greets the students, ties their shoes, eats breakfast with them, makes copies and coordinates our entire AR Program.”

The “AR”, or “Accelerated Reader” program is one by which students earn rewards as they accumulate ‘points’ for the number of books they read, or as they reach other reading goals.  Rewards can be something as simple as 12 points for a Slinky toy for a first grader to 100 points toward Nintendo-Wii play time for students in the higher grades.

“She prints reports,” adds Wilkins. “She gives prizes and she even takes books home from the library and takes quizzes herself to earn her own points.”

From her desk, Wilkins retrieves a list of Hofler’s accomplishments as she tells that this is just a sampling of what she does, and what she means to the personnel at the school. She then goes down the list and begins to read them off.

“Before school started,” recites Wilkins, in an almost sing-song manner, “she came out and helped teachers set up their classrooms.  And thru the year she puts up decorations and her volunteer work in the classroom always seems to cheer up the kids.”

“Snacks that she even shares with the teachers,” she says with a wink.

“Friday is sometimes our ice cream day and she will often bring extra money and buys ice cream for some of the children that never get any,” Wilkins added.

One senses that it’s the little extras that Hofler does on her own that are most appreciated.  Wilkins continued to read from her list.

“She makes photo collages of parties and other events we have, and she even printed my kindergarten class’ wish list while she was at home,” she noted.

From the kindergarten class Hofler then heads off to assist with first graders and later finishes off her day at the school library where she helps to shelve books.

Just this past holiday season she helped the kindergarteners compose their letters to Santa Claus that were published in the Gates County Index.

“She has become a true friend to me,” says school librarian Janice Askew. “She loves books and she really loves children.”

Hofler’s self assessment is as humble and self effacing as the remarks of her co-workers are effusive.

“I really don’t like to talk about myself,” she says with a shy smile in one of the empty classrooms during a break in her busy day as she sat in a chair designed for a small child.  Before speaking about the love she has for her work at the school, she began by recounting her working days with Hofler Tractor.

“It was a family business and I sold tractor parts for 30, 35 years and I enjoyed my job immensely.  I never dreaded going to work, and I really liked the work.  After we sold the business I could have stayed with it but 35 years is a long time and I was ready to get out, Hofler said.

“My name.” she chuckled, “was on the building.”

Even before leaving the implement business, Holfer was preparing for her new future.

“It really worked out,” she says with a grateful smile. “I think God just looked out for me the whole way because even before I finished at the shop I talked to (former Cooper principal) Susan Ward and she let me come in and last year was my first year.”

It also helps that Hofler’s great-nephew is a second-grader at the school.

“I pick him up and bring him in every morning,” she said, “I stay all day, and then I take him home.”

“I get here at eight o’clock and I usually go to kindergarten and greet those students.  Then I’ll walk with them (to the cafeteria) because it’s 24 of them with Mrs. Wilkins in front and I bring up the rear.  I just enjoy children.  I always have,” she said, adding, “I’ll help out and then go with them to lunch.  After lunch I’ll watch the students while the (teaching) assistant gets  lunch, then I go to recess with the kindergarteners.”

And that just takes care of the first three hours of Hofler’s day.  From the kindergarten class she then heads off to help Mrs. Askew in the library.

If it’s a slow day amongst the shelves, she passes the time with other activities such as decorating bulletin boards or making photo-copies for other teachers.  Eventually she finds her way next door from the library to the school’s computer lab.

In 2011, Hofler was named “Volunteer of the Year” for the entire Gates County Public School district.

“I keep busy,” Hofler says with a shrug as a smile begins to glow on her face, “and if it seems like I’m going to have a day with nothing to do, something always comes up.  This morning someone gave me some more books and that will keep me busy for another day or two.

“It’s saved my sanity and hopefully I’ve been a help to some of them,” she added.

Away from school, Hofler is also a Gates County Special Olympics volunteer.  Regina Hurdle and Gail Hawkins, who are in charge of Special Olympics for all of Gates County, also attend church with Hofler and this year she is assisting with the Special Olympics basketball team.  She is also especially fond of the winter bowling events that just ended; even going to far as to take some kids on her own to Franklin, VA bowling lanes for an afternoon of fun.

“That’s been another fun thing to occupy my time,” she says, “and they’re a very nice group of young people.”

“It’s been rewarding because they’re happy whether they win or not,” she adds. “They just enjoy the opportunity.

“And they’re loving,” she says smiling. “They’re a loving group that range in age from eight to 65.”

Growing reflective she says, “I think I would have enjoyed being a teacher because I’ve always loved children, going back to when I taught youngsters in Sunday School.  But I still have enjoyed the path I took, and I’m enjoying this one now.”

Hofler’s role as a true friend of her young charges also comes thru.

“I don’t know if I could be a substitute teacher,” she says, “even though I’ve been asked to do so.

“I want the children to like me,” she adds.  “A teacher has to keep discipline, keep control.  I just like being a friend because there are a lot of children around that just need to be friends.

“There are a lot of children that bring a lot of baggage to school,” she says quietly, “and sometimes they just need a friend.”

When asked where she hopes all this carries her, Hofler doesn’t hesitate in responding.

“But doing it when I want to,” she added with a hearty laugh.”

There’s one thing David Burke of Margarettsville wants you to know.  Behind him, and the good deeds he does, there... read more