There’s one thing David Burke of Margarettsville wants you to know.  Behind him, and the good deeds he does, there are a lot of other people.

“I may be the driver of the bus,” he insisted. “But I’ve got a whole lot of people riding on the bus with me to help get it done.” 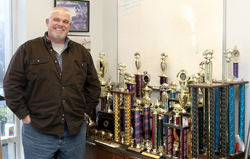 By the looks of the numerous trophies sitting on a table in his office, it’s very apparent that David Burke is an award-winning chef. However, his vast knowledge of cooking produces more than shiny hardware; he donates much of his time preparing food for various fundraisers. Staff Photo by Amanda VanDerBroek

The idea of being in the spotlight doesn’t come easy to Burke. After all, when you spend most of your time behind a grill or in the kitchen, the spotlight is the last place you’d expect to be.   But somehow attention seems to always find Burke.

Our State Magazine, The Biblical Recorder and an array of local media outlets have all featured Burke in their publications and programs. There are two things Burke is known for: his barbecue and his fundraising.

“I don’t do all that stuff for any kind of recognition, I’m just doing it because I know how,” he said.

Over the years, Burke has spearheaded and coordinated countless dinner fundraisers and community endeavors that have raised thousands of dollars for individuals and groups in need. Burke is adamant those fundraisers don’t happen on their own and he certainly doesn’t do it alone.

“There’s a whole team of people that stand behind me,” he noted.

He credits those he works with at Flambeau in Weldon where he serves as the plant manager.  At Flambeau, Burke has a “Dream Team,” a group of about 10 people that he can call on and who will respond for fundraising purposes.

“If we’re going to do something in a big way, we pull together and act like one big team and the next thing you know we’ve knocked it out, sell 1,100, 1,200 plates,” he said. “If they know I’m out fundraising for somebody; they try to fill the void when I’m gone.”

Burke said that community spirit is just as evident in the Seaboard Lions Club (he serves as the organization’s Chair of the Pig Committee) and at Galatia Baptist Church, where he’s been a member since for nearly two decades.

“I do it just because I can do it and I have the means to do it,” he said.

“My grandmother showed me how to cook,” he said. “She always told me she was going to show me how to be self-sufficient. And I can make a pan of homemade biscuits with the best of them.”

Those cooking skills have stayed with Burke into his adult life. He makes an array of dishes, including stews and pork barbecue.

“The good Lord has just blessed me with that talent,” he said.

His pork barbecue has turned Burke into a illustrious name in the world of competitive pig cooking. “The King Cooker,” as he is known, has competed in numerous competitions statewide since 2005. In his office at Flambeau, awards from those competitions fill every square inch of a table. He’s currently ranked fourth in the state for the whole hog competition and in the past he was a North Carolina State Showmanship Champion.

Burke credits Leslie Deaton for getting him involved in pork competitions along with his pal and fellow pig cook-off competitor Joe Peterson. Though he had always been involved time to time with fundraisers, it was Deaton’s battle with pancreatic cancer that really turned Burke’s competitive edge into something greater.

In the spring of 2009, Burke teamed up with Mike Clark and Herman Mosley, known in the area for their fundraising, to organize an event for Deaton, who had been traveling between North Carolina and Pennsylvania for treatment.

“He needed a little help to cover his expenses,” Burke recalled. “I think with that particular fundraiser we raised over $8,000.”

Deaton loss his battle with cancer that summer, but the seed had been planted and from there Burke’s desire to help has only blossomed.

“After that I decided that I have the ability to do this and I have the means to do it, if I can help I’ll be glad to try to do what I can to give back,” he said.

Since then, Burke has jumped into action at the knowledge of someone in need of fundraising assistance. School and church events, individuals and organizations in need, if there was a fundraiser there is a good chance Burke was there, While the world of pork is where he wins all of his visible accolades there’s no two words more rewarding than “sold out.”

“Fundraising is rewarding in a whole lot different manner,” he said. “What makes me the happiest of all is to see people smile when they eat the food that we cooked and then to be able to talk about how fast we sold out.”

This past December while sitting in church listening to a representative with Baptist Homes for Children, Burke felt the urge to do something.

“I honestly could not concentrate on what that guy was saying because that voice in my head was telling me, ‘You’ve got to get up and we’ve got to do something’,” he recalled.

After the service, Burke met with the representative along with the Galatia Baptist pastor where he confessed he had not listened to a thing the man had said.

“I apologized that I didn’t listen,” he said. “I said I couldn’t listen because I think the good Lord kept whispering in my ear – and He wouldn’t hush – for me to get up and help you.”

That conversation lead to each child in the Baptist Children’s Home organization statewide visiting Galatia Baptist Church for Christmas dinner.

“We had 105 kids and special need adults that are affiliated with the Baptist Children’s Home at our church,” he said. “I cooked ham, turkey, collards. I had a traditional Christmas spread for those kids.”

Gifts were also provided through toy drives organized through the church and Flambeau.

“We probably had a half of a tractor trailer load of what we gave those kids that day,” he said. “I don’t take the credit for it. I tell people all the time that was the Lord’s event, I just happened to be the bus driver.”

In Burke’s office the fundraising ball never stops rolling. He’s currently working on many upcoming events, including Seaboard Lions Club’s 50th annual farm equipment sale and auction slated for March 7 and an already sold out Feb. 18 Sweetheart Banquet that will benefit the residents of Pine Forest Rest Home in Potecasi he organized with his church’s Brotherhood Group.

Burke said fundraising is just the type of thing he enjoys doing because he has the means to do so and there’s enough of those who need help. But making things happen is the first step to helping out.

“Around here things just don’t happen,” he said. “You have to make them happen.”