WINDSOR – Friends, that’s how Bertie County Register of Deeds Belinda White has viewed the citizens who come into her office for more than three decades.

“My favorite part of this job has been the friends I have made who are still friends,” White said. “I do my best to be kind and friendly to everyone who comes in and to help them in any way I can. My staff has that same temperament, I believe.”

White said she recalled several incidents where she had someone who come in the office and gave her grief. When the next person came in, she did her best to smile and be polite.

“Someone asked me one time how I could flip a switch like that and be so nice to the next person,” White said. “I said, ‘what did that person do.’ They didn’t do anything but come in the office and they deserve for me to be nice to them no matter what.” 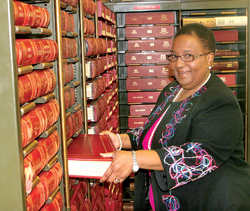 That sense of friendship has made the Register of Deeds Office a popular destination in the county. It has also made her popular amongst the staff of Bertie County and the Bertie County Commissioners.

Many said the smiling face White offers to anyone who comes in the office will be greatly missed later this year. White announced she will retire in December.

“She has been an asset to Bertie County,” Commissioner Norman M. Cherry Sr. said. “She has done everything she is required to do. She has moved that department into the 21st century regarding the work they are doing and what they give to citizens of Bertie County.

“I never hear anything negative out of her office,” he added. “She will be missed when she retires. Whoever succeeds her will not have to struggle the way she did at the outset because of the work that has been done.”

The work she has done updating the Register of Deeds office has not gone unnoticed by many. Colleagues call the deed books in the Bertie County office some of the best-kept in North Carolina.

“That was a priority when I first became Register,” White said. “Some of the books were starting to show signs of wear and getting in pretty bad shape. I made it a priority to get the books repaired and back in a good state.”

White said the books in the office date back to Bertie County’s founding in 1722 and she is proud of the fact the county has done such a good job of maintaining the records for nearly 300 years.

That was just the first of many projects White has undertaken during her time in office. She has also updated technology and increased the staff of the office during her time.

“I’m proud of our computer system,” she said. “We can do everything from beginning to end on that system.”

The last pieces that were put in place were a map scanner and printer which make it easier for those who come into the office to find the parcels of land they are searching for.

“That was the last piece of equipment I really felt we needed to get the office updated to the point it should be,” White said. “When the commissioners approved the purchase and it came in, I knew I was getting to the point of being ready to retire.”

White has been working with the public her entire adult life. She began work as a teacher assistant in Bertie County Schools and then moved to the Register of Deeds Office in 1976 as a Deputy Register of Deeds.

She remained in that position for 11 years before being promoted by then-Register of Deeds Peggy Jones to Assistant Register. When Jones decided not to seek reelection, White decided it was time to seek public office.

She ran for office for the first time in 1988, becoming the first black person to be elected Register of Deeds in Bertie County.

“I was cognizant of it,” she said. “I went on prayer and faith and I knew that I had put in the time and knew the job.”

She credited Jones for training her well to be Register, but said she had to learn on her own how much responsibility goes with the job.

“I really wasn’t planning to run last time, but my husband, my staff and the then County Manager (Zee Lamb) asked me to run one more time,” she said. “I thought about it and made up my mind that I wanted to serve one more term, so I decided to do it.”

That decision to serve four more years in office allowed White to become even more active in county affairs as she was named Assistant Clerk to the Board of Commissioners and helped them during the absence of the clerk.

Commissioner Rick Harrell said that service was typical of White’s dedication to the county and its citizens.

“She is well-deserving of being honored,” Harrell said. “She has always been as accommodating as she can be. She caters to our citizens every day and does a fine job of it.”

White said she was pleased with having served with the county commissioners and worked with many others for a long time.

“I have had an excellent rapport with the county commissioners,” she insisted. “They haven’t given me everything I’ve asked for, but they have helped me as much as they could.”

She and Clerk of Superior Court John C.P. Tyler have spent many years working across the hall from one another and she said she was going to miss serving with Tyler.

“The old man and I have been friends for a long time,” she mused. “We still pick and tease each other as much as we always have. He’ll always be a friend because he is a good man.”

Tyler said he was equally pleased to have worked with White for so many years.

“I will probably miss her as much as anyone because I see her every day,” Tyler said. “We’ve taken turns swearing each other in for many years. It just won’t seem right coming into the courthouse and knowing she isn’t going to be there.”

In addition to her work with the county’s citizens, White has also been an active member of the North Carolina Association of Registers of Deeds. In her service to that organization, she has served as Historian, Secretary, Treasurer, Vice President and President. She became the first black woman to serve as President of the state association.

In addition, she has served two terms as a member of the Roanoke-Chowan Publications Reader Advisory Board, served on the St. Luke Credit Union Supervisory Committee, been active in the Parent-Teacher Association and served on several committees in church.

White served most of her spiritual life as member of First Baptist Church of Kelford , spending 46 years worshipping there and serving as a church trustee and financial secretary.

Recently, she began attending Piney Wood Chapel Baptist Church where she works with the couples ministry and beautification committee.

“I loved the years I spent in Kelford, but I felt like it was time for my husband (William) and me to belong to the same church,” White said. “I have also enjoyed the time I’ve spent at Piney Wood Chapel.”

In fact, White said one of her plans when she retires is to be more active in the church and be able to help with various ministries.

Her other plan is to spend more time with her mother, who is in a nursing home.

Bertie Commission Chairman L.C. Hoggard III said he also hopes White plans to continue her service to the county when called on after her full-time service ends.

“In all the time I’ve known Belinda, she has been very professional, very thorough and a pleasure to work with,” Hoggard said. “She has always kept the board informed about what was happening in the Register of Deeds office and the service she was elected to perform.

“That experience will be missed, but I feel sure she has prepared someone to step in and continue on,” he added. “Still, I hope and believe we will always be able to call on her when she retires.”

Whatever the future holds, White made it clear she is extremely pleased to have been able to be an advocate for the citizens of Bertie County for more than two decades.

“I thank the citizens of Bertie County for their trust and faith in me these last 24 years,” White said. “Thank you for the opportunity. It has been great and I will miss it.”

WINDSOR – A man who brought energy and enthusiasm to Windsor has died. Collins Cooper, who served dual roles as... read more