GATESVILLE – Times were tough for the Emmett and Juanita Dildy, a black family raising seven children in the rural South prior to the Civil Rights movement.

However, no matter how bad the cards were stacked against them in that era of racial discrimination, the family was proud to hang their hat on one enduring quality – that of doing things right.

Now, decades later, Esther Dildy Walton Lassiter can proudly look upon her past and credit those valuable life lessons to her successful career…..make that, careers. 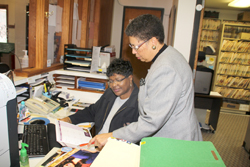 For nearly 20 years, Lassiter served the children of Gates County as a public school teacher, the majority spent as a Home Economics instructor at Central Middle School.

“Teaching is a rewarding career. However the rewards come years later when you see former students and you see their successes in life and they acknowledge you as an influence,” Lassiter said.

For most, 20 years on the job would have fulfilled their life’s desire to work. That doesn’t apply to Esther Lassiter.

After leaving the classroom in 1992, Lassiter was hired as the Child Nutrition Director for Gates County Public Schools.

“That was a new challenge that I embarked upon with the determination to be the best,” Lassiter recalled. “I loved my work with the employees in every school cafeteria.  I taught teamwork, good work ethics, positive attitude and pride in the jobs performed.”

That position led Lassiter to become active in the School Nutrition Association and in 2001was elected the second black female to ever hold the position of State Vice President of the Association.

“My travels took me across the state and country. It was a very rewarding experience and one I look back on as one of the highlights of my career,” she said.

In 2005, Lassiter retired from the county’s school system with 32 years of loyal service. But sitting at home in a rocking chair and reminiscing about the good old days was not in Lassiter’s future.

“Sitting at home was not my dream,” Lassiter stressed. “So, after a very short vacation (June-September of 2005), I took the position of coordinator with the Gates Partners for Health (GP4H).”

Lassiter was already familiar with the Healthy Carolinians Partnership when they first came to the county in 2002.

“After acquiring the position of coordinator, once again I put my whole heart into the work. I’ve always been under the thought that you can never rest your mind, you need to plan and think of what lies ahead,” she added.

Fully understanding the passion she has for whatever she does, it comes as no surprise that Lassiter works far more than the 10 hours per week she is paid by GP4H.

“I care about this county of Gates,” she said. “I have lived here for 39 years so this is home.  When I see something that would benefit the health and quality of life I move forward seeking the help of others.  Workshops, trainings, I just don’t send representatives; I go also and many times make sure others have transportation to get there. Time spent in efforts does not matter to me. What does matter is having positive results.”

“Whatever she does, she puts every ounce of time and energy she has into that project,” said Joyce Bracy, an employee of the Gates County Health Department. “Being a very humble person, she’s not one to toot her own horn; she rather leads by example. What she truly loves are the people of Gates County. She has their best interest at heart, especially when it comes to helping them learn about living healthier lifestyles.”

GP4H is under the umbrella of Albemarle Regional Health Service. The organization became certified in 2003 and has since been recertified twice.

“With the partnership everyone comes to the same table to determine from the health assessment what the local concerns are and what the needs are for Gates County and we focus on those.”

“We’re working to address those needs,” she said, adding that the recent opening of a dental clinic in the county was a start. She also mentioned the Gateway Community Health Center now opened in the county as well as chronic disease self-management classes now being taught throughout the community. Health tips are sent out every three months to churches in the county to share with their parishioners.

GP4H is also seeking to become a state certified member of the Safe Kids Coalition.

“I have a passion for all we offer through the Partnership, more so from a personal standpoint because my mom died of cancer, my father from Alzheimer’s, and my brother from diabetes,” she said.

Perhaps the largest annual event hosted by GP4H is Family Fun and Fitness Day, now in its sixth year.

“That event grows every year and we hope it will continue to grow,” Lassiter said.

The organization is also heavily involved in the newly created Gates County Farmer’s Market. The Market, located adjacent to Brinkley’s Hardware in the Gates community, will open its second year in June.

Born in Whaleyville, VA, Lassiter was the oldest of seven children in her family.

“Mom and Dad always insisted that we do things right and to the best of our ability,” she recalled. “When given household chores we had to do them to meet our parents’ standards.  If the job was not done to their satisfaction we had to do it again and again until we got it right.  We learned early in life to do it right the first time.”

Those children were blessed to have a full-time mother at home.

“She had a fulltime job raising seven children, keeping us clean and gardening,” Lassiter said. “Dad began working at the Norfolk Naval Shipyard in Portsmouth at the age of 19.  Mom’s adopted brother, George Shurn, moved in with our family before I entered school. I thank God for him because my uncle taught me to read. During my elementary school years my uncle would order from a catalog three to five dresses for me each year so that I would have clothes for school. When I was older, Uncle George bought me a sewing machine. I later began to make my own clothes for school and church.”

Lassiter graduated with honors in 1969 from Forest Glen High School in Suffolk, Virginia.

“There were about nine blacks attending Forest Glen at that time,” Lassiter recalled. “I wanted to represent my race in a positive manner. When I got home and after I did my chores, I was into the books. I studied hard. There were many nights in my high school years that I would stay up until after 11 pm studying.”

That hard work and dedication to her studies provided a smooth transition to the next level of education.

“By my first year in college I remember thinking to myself that this was a breeze,” Lassiter recalled. “I came out with a 4.0 my first semester because I had worked so hard in high school.”

As the only child in her family to go to college, Lassiter’s father borrowed $800 from a finance company to enroll her at North Carolina A&T State University.

“He knew I wanted to go to college and was determined to get me into school,” she said. “Once in college I received financial aid and work-study.”

But times were still tight as she lived on a budget of 35 cents per week and spent that on washing and drying her clothes…. what little she had of them.

“During my first year of college I purchased a pair of faded jeans for $1.  That one pair of jeans lasted me for the entire four years of college,” she recalled. “I also survived those four years thanks to care packages sent from home by Grandma Ruth (Pierce). She would send nabs, pottage meat and vienna sausages.”

After returning home from college her first job was at the very first fast food restaurant in Suffolk.

“I recall working at the register one day when a customer looked at me and said ‘you look like a teacher.’ I did not know that teaching would become a vital part of my future.”

Lassiter has been married twice, first to Edward Steve Walton who passed away in 1989. She remarried in 1991 to the Rev. Sherman E. Lassiter of Suffolk.

She is the mother of one daughter – Andrea Boyd, a business owner in Chesapeake, VA, and a son, Aaron “AJ” Walton, who just recently obtained his Masters of Divinity degree from Duke University and is currently seeking a PhD from the University of Virginia. She has a step-daughter, Demetrice Norment of Petersburg, VA.

Even though she devotes much of her efforts to GP4H, Lassiter still has the time to serve her church – New Hope Missionary Baptist of Gates. There she serves as a Deaconess, president of the Pastor’s Aide Ministry, Chaplin of the Women’s Ministry and does the floral arrangements for the fellowship hall. She started the Black Heritage program now hosted annually by the church. In addition she orchestrates a yearly Health and Wellness Fair.

“I love the Lord and give of my time and service. If there is a task that needs to be done I am willing. I only say no if it is in conflict with other volunteer work,” Lassiter stressed.

She serves as co-chair with her husband for the Baccalaureate Service held annually for the graduating seniors of Gates County High School.

After all these years of dedicated service to the citizens of her county, Lassiter still has no idea of when she call it quits.

“I’ll retire when the good Lord says it’s time to stop. As long as I’m able to help somebody I will continue to do so. When I’m no longer able to do my best, I’ll step down,” she concluded.

To learn more about the exciting work being done by Gates Partners for Health or to join the partnership, contact Lassiter at 252-357-1380.