Sara is the daughter of Janet and Glenn Joyner of Carrsville, VA. She is the granddaughter of Peggy Mulder and the late Ruben “Jake” Mulder Jr. and Rubin Story and the late Nell Story, all of Franklin.

Dr. Roger D. Crump, Pastor of Sycamore Baptist Church, officiated the ceremony. The bride was escorted by her step-father and given in marriage by her mother and step-father.

Following the wedding, a reception was held at Southampton Agricultural Center. Reception greeters were Renee Wrenn and Carol Jones, family friends of the bride.

The couple will make their home in Murfreesboro.

On June 18 an engagement party was given by the bride’s family at the home of Carolyn and Bryant Bunn.

On October 1 a tea party was given by Wendy McCourry and Marilyn Ray, both aunts of the bride, at Old English Tea Room.

On November 12 a Christmas shower was hosted by Lauren Story and Jennifer Joyner.

A couple’s shower was given on November 26 by Wanda and Chuck Brothers.

On December 6 a bridal shower was given by the groom’s friends of Conway, NC.

An after rehearsal dinner was given by the groom’s parents. 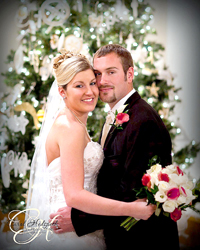