The tenure of the longest-serving District Court Judge in Judicial District 6B will draw to a close in December.

The honorable Thomas R.J. Newbern, who serves as Chief District Court Judge, announced recently he will retire from that post at the end of his current term and will not seek reelection. 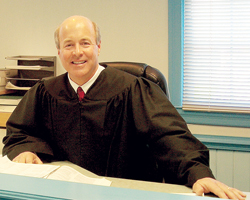 “When this term ends, I will have been in a courtroom for almost 30 years,” Newbern said. “The time has come for me to spend more time with my family and friends at this point.”

Newbern said he has enjoyed his term in office and that he hopes to continue to be able to serve the people of North Carolina upon his retirement.

“At the appropriate time, I am going to ask Chief Justice Sarah Parker to appoint me as an emergency District Court Judge,” he said. “If appointed, I hope to still be able to hold court when needed.”

Newbern began his legal career in 1983, just months after his graduation from Law School at Wake Forest University. He completed his undergraduate work at the University of North Carolina at Chapel Hill.

His first job in a court room was serving as Assistant District Attorney under then Judicial District 6B Attorney David Beard. He served in that role until May of 1991 when then Governor Jim Martin appointed him to the bench.

Newbern was selected to fill the unexpired term of Judge Robert Earl Williford who had retired from the post and then had passed away.

He had to file for election to the office shortly thereafter and ran unopposed for the post in 1992 when he was elected for the first time. He has continued that trend for the next four terms as he was unopposed in each of those elections.

“I’ve been through five elections and never had opposition,” Newbern said. “I am very proud of the fact no one has ever filed against me. I believe that speaks to the type of judge I’ve tried to be.”

Newbern said he was thankful to those who helped him along the way, including Beard who he credited with much of his success.

“I’m especially thankful to David for having hired me and then for the time he took to train me as a trial attorney,” Newbern said. “All the things I’ve done in my career have been based on the help he gave me in the beginning.”

He also credited Judge Williford, Judge Harold Paul McCoy and Nicholas Long with having an impact on his judicial career. He also expressed his gratitude for Trial Court Coordinator Sheila Eley, who he said had been such a help in his years on the bench.

Newbern said a powerful influence on his career was Judge Quinton Sumner, an emergency judge who held court in Hertford County while Newbern was an Assistant DA.

“I was so impressed with the way he handled himself,” Newbern said of Sumner. “He was forceful when he needed to be, but showed kindness to everyone. I always thought if I ever was fortunate enough to be on the bench that would be how I wanted to treat people.”

He said in his time as a prosecutor and judge he had learned there were two types of judge.  One, he said, is  a person who thinks the position gives them power and the other who takes it as a responsibility to treat people fairly.

“If you have the latter of those two, you have the chance of having a good judge,” he said. “I’ve always tried to be that way on the bench.”

He said that was easier when he remembered who he worked for while deciding cases.

Newbern said there were several experiences in his career that made him glad he chose law. He specifically cited times where people were skeptical of the judicial system, but thankful to him for his fair dealings after he had worked with them.

As he looks back, he said he was thankful for the chance to serve the people of the district.

“It’s been a great honor to serve the people of Hertford, Bertie and Northampton counties as District Court Judge,” he said. “I will really miss the people that I’ve worked with – the clerks, District Attorneys, attorneys and law enforcement.”

Newbern said he was also thankful to his family.

“I’m thankful to my wife, Margaret, and my children for being so supportive and understanding of what it takes to be a District Court Judge,” he said.

Newbern will continue to serve until his term expires in December. While announcing his retirement publicly now, he had already made those in the N.C. Bar chapter for Judicial District 6B aware of his intentions.

WINTON – Six times her name has appeared on a ballot and six times she has been elected Register of... read more