WINTON – Six times her name has appeared on a ballot and six times she has been elected Register of Deeds in Hertford County.

Kathleen Wright said she is thankful for the support of the people of Hertford County, but the time for her to step aside has come. Wright said Thursday she has decided to retire from her post and will not seek reelection this year. 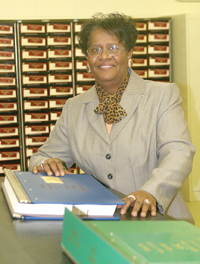 Kathleen Wright has decided to end her 24-year career as Hertford County’s Register of Deeds.

“I think the time has come,” Wright said. “I’m looking at other things that I feel I can do to be an asset in other areas.”

Wright said she also wanted to make sure she retired while still able to enjoy that time of her life.

“I always wanted to have good health and take advantage of being able to travel,” she said. “I have grandchildren in North Carolina and Georgia that I want to spend more time with and I think that’s part of it.

“I also feel that I can take part and help in other areas in which I can serve better,” she added.

Wright was originally elected Register of Deeds in 1988 following the death of Register Gwendolyn Hawks.

Pauline Brady, who served  as Acting Director, did not file to serve as Register, but Wright and two other candidates did. At the time she was serving as a teller at a bank in Aulander.

“I was the first black teller to work in Aulander,” she said. “I have broken a few barriers over my time.”

The next barrier was becoming the first black person to serve as Hertford County Register of Deeds. She was elected by defeating a Democrat in the primary and topping a Republican in the fall of the year.

“I knew the situation,” she said, when asked about becoming the first black person to hold the office. “Since I had been in that situation before, I knew the challenge.”

While she was coming into a new role, Wright said she knew quickly that she could adapt because her first goal was to be a positive person to meet the public.

“I wanted to be approachable and the kind of person that was easy to talk to,” she said. “I want to treat people the way I’d like to be treated.”

She credited Bunny Brady for being an excellent trainer as she learned her new role.

“I’ve always worked in an office environment,” she said. “The hardest part was making sure I learned and followed the General Statutes and made sure the records were permanently available to the public.”

She said she has always taken that responsibility seriously. In her first term, she attended every training session available to make sure she was ready for her new job. In fact, Wright became certified as a Register of Deeds in that first term.

“I haven’t stopped,” she said. “I have done everything I could to develop a good working relationship with the people who use our office and other registers throughout the state.”

Wright said the most enjoyable part of her job during her 24 years in office has been helping the citizens of Hertford County.

“I really feel like I have been here to help people who come into the office,” she said. “Sometimes they’re not sure what they are looking for and I have enjoyed being able to help them.

“I always take the approach that no question is a foolish question,” Wright added.

One of the reasons she has been successful, Wright believes, is that she has always been willing to work.

“I’ve never been afraid of work,” she insisted. “I can’t recall a  job I didn’t like. My parents taught me early that work is something you have to do and to do it to the best of your ability.”

Among the accomplishments of her time in office has been the addition of a website for the office which allows those who need them to access records. She said all births have also been saved on computer since 1988; deaths and other records since 1990.

Another thing she is pleased with is her record of fiscal responsibility.

“I have been able to stay within my allotted budget every year I’ve been in office and done so without padding my budget,” she said. “I’m somewhat conservative in that and I don’t believe in waste. When you speak to the county commissioners and county manager, they know if I ask for it, I need it.”

Wright said she isn’t sure what will happen once she retires. One of her deputies, Elvira Spiers, has indicated an interest in running, but has not made a decision, Wright said.

“I’m not sure what her decision will be,” Wright said. “She knows the job very well.”

Wright said if someone sought the office and won, they would do themselves a disservice if they didn’t keep Spiers because of her experience.

That future is still some time off, however, as Wright will continue in her role until her current term expires in December.

She also stays busy with several other appointments. She either does or has served on the boards of Hertford County Smart Start, Hertford County Economic Development, R.L. Vann Resource Center, N.C. Registers of Deeds and the YMCA.

In addition, she has been active at Piney Wood Chapel Missionary Baptist Church where she sings in the choir and serves as President of the Gospel Choir. She also works with the couple’s ministry and serves as a deaconess.