Freezing for a reason 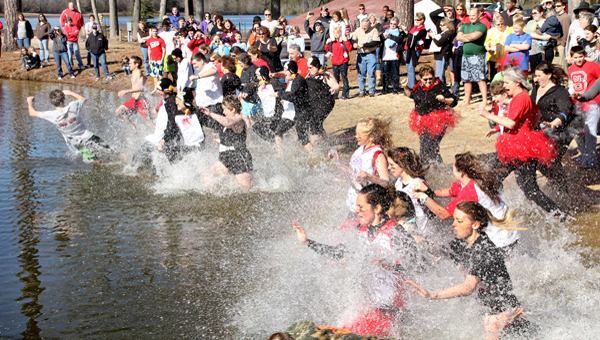 The first wave of participants in the Gates County Polar Plunge make a splash in the cold water of Beaver Lake. Staff Photo by Cal Bryant

EURE – They were freezing for a reason here Saturday, Jan. 28.

The inaugural Gates County Polar Plunge attracted 80-plus brave souls who took an early-winter dip into the cold waters of Beaver Lake, all in a fun and festive event to raise money for Special Olympics.

“What a great day and a great turnout for a first-time event,” said Barbara Toti, one of the event’s organizers. “We had 100 or so people standing on the shore watching and cheering on the plungers. We were very pleased with the overall turnout. It was a great day for our Special Olympics program here in Gates County.”

“Great” came in the form of over $9,000 generated by the Polar Plunge combined with the Tread the Mill Walk held back in November.

Regina Hurdle, who directs the Gates County Special Olympics program, said she appreciated the support generated through events such as the Polar Plunge and Tread the Mill.

The majority of those taking the plunge on Saturday were members of teams, some taking the opportunity to adorn themselves in unique apparel. Judges were on hand to rate those costumes and awarded first place to Penguins Plunging 4 Stephen; second place to T.S. Cooper Wet Wildcats; and third place to “Baron” Our Skin for a Good Cause.

The plunge, taken in the 54-degree waters of Beaver Lake, was performed in several waves due to the high number of participants. A few brave souls “tested” that cold water by jumping off the end of the pier. That was followed by those entering the water directly from the shoreline. Some chose to wade out knee-high while others submerged themselves….all rushing back to dry land and reaching for towels.

Another way to warm up following a brisk dip into the cold lake was a piping hot bowl (or two, or three) of homemade chili. A “Chili Cook-off” was also part of the fundraising event. Fifteen chefs participated and the judges awarded the top three to: Ray Felton (1st place), Lisa Jernigan (2nd place) and DeAnna Dorsey (3rd place). Kyle Hobbs was recognized as the youngest chef.

“We appreciate all of the chefs who donated their chili for the chili challenge,” Toti said. “By the looks of the serving line there were some hungry plungers.”

Toti also praised the support of the event sponsors and members of the community that dug deep in their respective pockets to help benefit Special Olympics.

“We were able to reach our goal of $9,000 thanks to those who supported our events,” she said, adding that $4,000 was raised at Tread the Mill and $5,000 generated during the Polar Plunge.

The following businesses, clubs and individuals were signaled out for their support:

“We also appreciate all the many citizens who supported our walkers and our plungers, without your donations to them we could not have reached our goal,” she added.

Toti also extended thanks to Gates County Rescue and Gates County Emergency Management for their support and readiness to “take the plunge” in case of an emergency.

“The event was a great success and would not have been possible without the members of the Beaver Lake Ski Club and their beautiful amenities.  We are fortunate to live in a caring and giving community,” she noted.

“Project Unify extends a big round of applause to over 30 volunteers who gave their time, money and hard work to make the first annual Gates County Polar Plunge a successful event and we’re already looking forward to next year,” Toti concluded.

Danny Byrum served as the event’s Master of Ceremonies.

In addition to the main attraction, those in attendance also enjoyed games of basketball and cornhole.

Staff members of three funeral homes have joined together to form a local partnership. Pictured, foreground from left, are Sarah... read more