Clock winds down on White’s career

WINDSOR – It has been a job well done by a good and faithful public servant.

Later this year, however, it will come to an end. 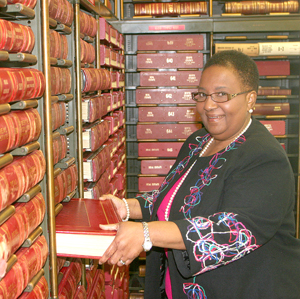 Bertie County Register of Deeds Belinda White announced last week she will not seek reelection to that office, one she has held since 1988. Staff Photo by Thadd White

On Thursday of last week Bertie County Register of Deeds Belinda White announced publicly what she has been thinking privately for a year – she will retire at the end of her current term in office.

“It’s time,” she said simply. “We have accomplished everything I thought I could contribute when I ran for office originally. This office has changed in many ways and I’m pleased with what we’ve done.”

White began her work in the Register’s office more than three decades ago when she was hired by then Register of Deeds Peggy Jones. For 12 years she worked in the office alongside Jones. She said that time was rewarding.

“She hired, trained and promoted me,” White said. “She was a really bright person and I owe a lot to her as far as me being here as long as I have.”

When Jones decided to retire in 1988, White opted to seek the office of Register. In seeking the post, White also sought to become the first Black person to hold the job.

“I was cognizant of it,” she said. “I went on prayer and faith and I knew that I had put in the time and knew the job.”

The result was an almost 3-1 triumph over her opponent and the first of six terms in office.

White said she realized quickly the change in serving as Assistant and Deputy Register to holding the elected office.

“The responsibility is much greater,” she said. “I am bonded for $50,000, but we record instruments in the millions and even billions of dollars. We are also responsible for records in births, deaths and marriages.”

The records in White’s office date back to the formation of the county in 1722.

One of her projects during 24 years in office has been to maintain the books in which deeds are kept and repairing those which have shown signs of age.

“I have been told by other registers who have visited that we have the best-looking books in the state,” she said. “That’s important to me. I want our records to be well-maintained.”

White said she has enjoyed working with the public during her years in office. That, she said, is the most rewarding part of the job.

“I think the best part of my job has been the friends that I have made here and who are still friends,” she said.

She also credits her staff – Assistant Register of Deeds Sandra Clark and Deputy Registers Annie Wilson and Shakedia Williams – with being the best staff she could ask for.

“When I interview people I tell them this is a family,” she said. “We spend more waking hours together than you do with your family, so it’s important for everyone to work together and get along and they have been great about doing that.”

While she is excited about her job, White said her retirement will give her the opportunity to spend more time with her mother.

White said she realized what the voters have given her a chance to do and she is appreciative.

“I thank the citizens of Bertie County for their trust and faith in me these last 24 years,” White said. “Thank you for the opportunity. It has been great and I will miss it.”

White is a past president of the North Carolina Association of Registers of Deeds. She was also the first black woman to hold that post when she served in 2001-2002.

While planning not to file for election next month, White said she is prepared to support a candidate in the campaign. Wilson plans to seek office and White said she hopes voters will support her.

“Obviously, I was hoping one of my ladies would run,” she said. “I didn’t think Sandra or Shakedia would want to and they made it clear I was right. I think Annie has the ability to do this job well. She has the same amount of experience I did when I ran.”

White’s term in office ends in December and she said she plans to serve out that term before going into retirement.

Tale of the ‘tape’

WINDSOR – A Superior Court Judge ruled in favor of Bertie County here Monday. The Judge, however, agreed with the... read more