One hundred and counting 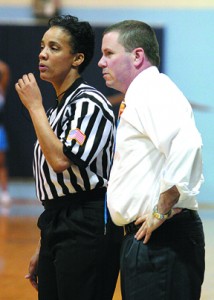 Great individual accolades, but all both wanted to talk about was the team win, 68-59, over Elizabeth City State at the Helms Center.

“It’s not about the 100th win,” said the veteran coach, who achieved the mark in his eighth year on the Hawks’ bench. “It’s about a team win at home over the division leader and providing ourselves an opportunity to climb back into this thing.

“At 0-2 it’s real easy for a team to hang their heads,” he added, “but this team didn’t do that and any night where we can compete on the backboards we’re going to have a chance to win.”

Chowan, who’d been out-rebounded in six of their last seven games – all losses – actually tied the Lady Vikings in collecting caroms, 33 apiece for both teams; with nine of those ending up in the hands of the 6’-3” Curtis.

“I tied the blocked shot record,” she asked with a genuine sense of wonder after the game. “I didn’t even know that.”

Curtis now has 59 blocked shots on the year and can eclipse that mark Saturday in her hometown of Richmond when Chowan plays Virginia Union.

More importantly than the shots she swatted away were the ones she made: scoring 13 points to go with her team-leading rebounding numbers.

Junior Talayla Lynch led all scorers with 22 points, including draining 6-of-9 three-point shots and going 4-for-4 at the free throw line. Teammate Ransheda Jennings with 10 points and seven assists.

“We worked hard for this,” said Lynch. “We came out aggressive tonight like we wanted this win and we played like it.”

Elizabeth City State came out firing: knocking down five of their first seven shots to take a 13-6 lead four and a half minutes in.  A Lynch trey knotted the game at 13 and capped a 7-0 run by the Hawks just three minutes later.
It was a tight first half as neither team took more than a four point lead until there were two and a half minutes to halftime when Lynch made another three pointer to put Chowan ahead 32-27.

Elizabeth City State trimmed that deficit down to five 4:15 seconds into the second half but a pair of T’Arra Cutting free throws and a layup by Jennings put Chowan up by eight.

But Chowan then hit a scoring drought: just two points in over five minutes. ECSU didn’t capitalize, however, as the Lady Vikings only scored four points over the same stretch.

But the Hawks’ offense woke up after a timeout, went on a 9-0 run and began to put the game out of reach; building a lead of as much as 18 points, 67-49, with less than two minutes remaining.

Chowan (8-11, 3-6, CIAA) ended a three-game home stand. In fact, they played six of their past seven at home.  They now take to the road for a five-game stretch beginning Saturday evening at Virginia Union.