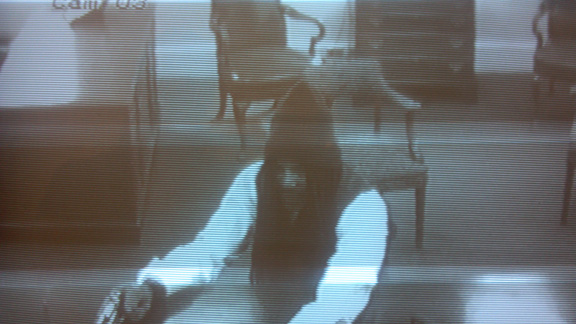 This image was taken during Friday's bank robbery in Colerain

COLERAIN – Bertie County authorities are searching for at least one suspect in a bank robbery here Friday afternoon.

The suspect is described as 6’ tall and weighing approximately 200 pounds. He has long dreadlocks and was wearing all a black vest with a white long-sleeved shirt below the vest. He also had a hood covering part of his head.

The sheriff said the suspect got away with slightly more than $6,500 in cash during the robbery which occurred at approximately 12:38 p.m. Friday. The first officer from the Bertie County Sheriff’s Office was on the scene within five minutes, he said.

In addition to seeking the suspect, the sheriff’s office is looking for a white vehicle, possibly a Toyota Camry, which was spotted shortly after the robbery. Holley said the vehicle is being sought, but stressed that it is not certain that is the case.

The sheriff also said it was too early to tell if the robbery was connected to a rash of heists of businesses in Pitt and Martin counties, but his office is already in contact with law enforcement officials in those counties  to assess the situation.

“We are working diligently on this case and we have several agencies that are working with us,” Holley said.

He did encourage anyone who saw something out of the ordinary or who may have seen the suspect or the vehicle to call the Bertie County Sheriff’s Office at 794-5330 or to call him at 325-0260.

“As always, we want your information and not your name,” Holley stressed. “We are working to make sure we talk to everyone that was in the area when it happened, but ask that anyone who has information call us as soon as possible.”

RALEIGH – Despite the passage of six months, some North Carolinians are still struggling to recover from the devastation caused... read more