RICH SQUARE– An Aulander man is behind bars in theNorthamptonCountyDetentionCenterafter he allegedly broke in and stole over $20,000 worth of prescription medication from Futrell’s Pharmacy Service here early Thursday morning.

According to Rich Square Police Chief Alan Roye,Ernest Lee Lane, age 39, of203 West Main Street, Aulander, was arrested and charged with felony breaking and entering, larceny, and injury to real property. Roye said additional charges are pending as the investigation continues into the crime. 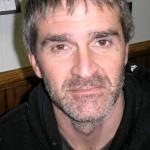 “As Lt. Byrd arrived at the rear of the business he saw a Ford pickup truck lying on its side in a big ditch alongMaple Street,” Roye said. “He approached the truck and foundErnest Lee Laneinside.Mr. Lanewas taken out of the truck with the assistance of Northampton Sheriff’s Deputy Doug Mann who had just arrived to assist.”

Roye said that Byrd then checked the rear door of the pharmacy and found it had been ripped from its hinges. He also discovered extensive damage to an air conditioning unit at the rear of the business and a propane tank had been turned over.

“It was found that the suspect used his truck and a winch to rip the door open and move the air conditioner unit and propane tank out of his way,” Roye said.

After the truck was pulled from the ditch, Roye found over $20,000 worth of prescription medications hidden behind the rear seat, allegedly stolen from the pharmacy.

Roye said Lane told him that upon leaving the premises, a vehicle cut him off in the alley behind the pharmacy, causing him to run into the ditch.

Bill Futrell, owner of the pharmacy, said damage was done to a metal door and the door frame as well as a window and the air conditioning unit.

“We were able to secure the rear door on Thursday morning,” Futrell said. “We’re now in the process of having estimates done on the repair costs. The air conditioning unit will be the most expensive thing to replace. I’m unsure at this time of the extent of damage done to that unit.”

While the medication stolen from his store was quickly recovered, Futrell said those items cannot be placed back on the shelves for future sales.

“Once medication leaves the possession of the store, it cannot be dispensed if it returns….that’s based on the law governing the sale of prescription medication,” Futrell explained. “All I can do with it now is inventory all those stolen and recovered items and report it to my insurance company.”

If there was one silver lining to this crime, Futrell said he glad it occurred at a time when there were no customers or employees in the pharmacy.

“I’m thankful no one was there in harm’s way,” Futrell concluded.

WINTON – Hertford County Public Schools will potentially be part of a $15 million grant through the North Carolina New... read more