Board asked to reverse merger 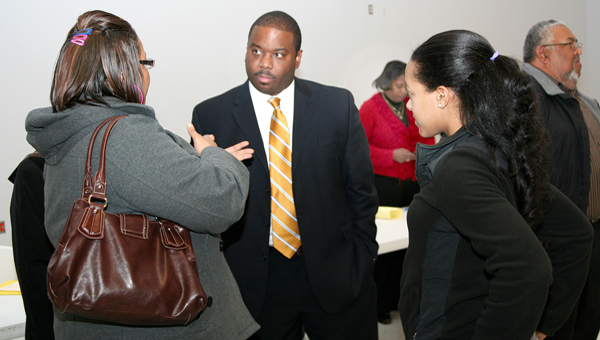 JACKSON — Concerned Northampton County citizens rallied once again here at the Cultural and Wellness Center to speak their minds about the consolidation of the two public high schools.

“As you all are well aware tonight’s public hearing is an opportunity for the board to hear from the community regarding the planned consolidation of the two high schools into a single high school housed on the current Northampton County-East campus,” said Vice Chair Marjorie Edwards as she opened the hearing.

Edwards, filling in for Board Chair Donald Johnson who was absent, continued by saying each person was allotted three minutes to present their information and comments to the board.

During the public hearing, 13 people voiced their concerns about the merger, citing long bus rides for students coming from the western end of the county and worry about the effect on academic performance.

Grover Rook said those who were in attendance were obviously interested in the type of education the district provided to its students and were concerned about the merger.

He referred to a previous feasibility study that he said suggested one school was in better condition than the other.

“I know one school has the greater capacity than the other, but based upon that study one school is almost 50 years old, mechanically unfit, the layout is just not suitable for the type of education and the type of instruction we need to be giving our students for them to be successful in school,” he said.

Rook said West was approximately 22 years old and has 65 acres for expansion.

He added he felt, as many do, it would be great to have a central school and until that single high school could be constructed in the Jackson area the board should leave the schools separate.

Clinton Williams said he applauded the “spirit” of consolidating the two high schools, but it was causing disparities for the students that have to travel so far to get to East.

He asked the board to reconsider the MBAJ study and the recommendation to keep the high schools separate.

“From a functional standpoint it would make sense to have that mirror image (of schools) on the eastern end of the county and that would prevent and any major traveling on any children in the county,” he said.

Anthony Roberts asked the board to come up with a better plan to make the consolidation work.

Among his apprehensions, Roberts said he was concerned with the job losses the consolidation would create.

“In this tough economy the largest employer in Northampton County is eager to cut people out of a job,” he said. “And hope there’s county commissioners here tonight to hear this because I want to know how we’re going to keep this county afloat if we keep on cutting people’s jobs.”

He concluded by asking the board to reconsider their decision and come up with a better plan for consolidation or to leave the schools as they are.

Christy Kee, a parent of a seventh grader at West, said the idea of the schools being consolidating was disheartening.

“My feelings about Northampton County making decisions for our kids has never waivered a bit,” she said. “I feel like you have not put the kids’ interest at heart.”

She urged the board to listen to the parents and students. Kee said she has her schedule set as to when she can pick up her daughter and with the consolidation of the schools she would have to make other arrangements to have her daughter picked up.

West freshman NaTajha Phillips said at her school she was able to take courses in English I and Algebra I in eighth grade, which she said gave her an advantage this year.

“I’m fearing that traveling so far to East will give me a disadvantage this year,” she said. “It will push me back academically. …I’m thinking that me having to go to sleep earlier and get up earlier will put me at a disadvantage if I go to East because I feel that I will not do as well as I am now.”

Sceva Kendall said he has three children that attend Northampton County Schools and he was concerned with the long ride to East.

“You’re talking about all these juveniles going from west to east,” he said. “There is no way you have our children’s best interest at heart.”

Amanda Clements said her child already boards the bus at 6:35 a.m. and most people are already struggling to keep their children in school.

Rev. Richard Webb, representing a group of concerned citizens, asked the board to reconsider their decision.

“We plead with you to reverse your decision leave the schools as they are until they are centrally located,” he said. “These people have come to you many times, we would like for you to resolve this matter without further interruption.”

He added the attorney for the group of citizens he represented was putting a final provision on “our motion for injunction.”

“We don’t want this, but this board leaves us no other choice,” he said.

Edwards concluded the meeting by thanking the crowd for their attendance.

“We will be talking with our superintendent, our board members  and our attorney at this time as you know we are not allowed to do any conversation back and forth,” she said. “We will be letting you know after we meet.”