The consummate Bertie County lawman died in his home Monday.

Milton Ray Morris, 72, served with the Bertie County Sheriff’s Office for 30 years, culminating in a 16-year tenure as Chief Deputy of the county. He is remembered by many as a good law enforcement officer and a better person.

Morris is also remembered as a man fiercely loyal to retired Bertie County Sheriff J. Wallace Perry and the men in uniform that worked under him. 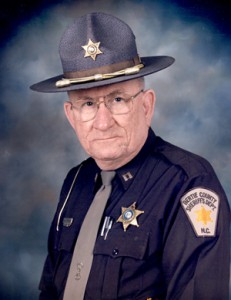 “He was the best friend I ever had,” Perry said. “I worked beside him for 14 years, hand-in-hand, and then for 16 years he was my Chief Deputy. He had as much to do with the success of my career as anything I could point to with the way he served the public and his loyalty to me.

“It’s hard to even explain how I feel,” he continued. “Milton Morris was a good man. I believe those who are working in law enforcement now – including Sheriff John Holley – were tremendously influenced by him. He will be greatly missed.”

Holley agreed with the assessment given by Perry.

“Out of the 29 years I’ve worked in the Bertie County Sheriff’s Office, he was the most committed public servant I’ve ever been around,” the sheriff stressed. “He was meticulous when it came to keeping his equipment in good shape. When one of his cars was removed from service, it looked almost new because he was that serious about his job.

“To Milton there wasn’t a sheriff like Wallace Perry,” Holley continued. “He was very loyal to Sheriff Perry.”

The incumbent sheriff also said that he learned much from Morris.

“He taught me a lot and I know he’s going to be missed,” Holley added. “If you were down, Milton always had a way of making you laugh. He was truly loved by his fellow officers and was truly a family man.”

Current Bertie County Sheriff’s Lt. Carl Hoggard worked many years with Morris. He said they began working together when Hoggard joined the sheriff’s office in 1984 and he quickly learned how good an officer Morris was.

Hoggard also called Morris a great family man, saying he showed how much he loved his wife and children.

In addition to his service to the citizens of the county, Morris was also a servant to his Lord. He was a member of Center Grove Baptist Church where he was respected and admired.

“One thing about Milton is that he loved everybody,” Center Grove Pastor the Rev. Mark Corbett said. “He was always full of the fruits of the spirit – joy, peace, goodness and faithfulness. If he didn’t know you and met you, he would love you quickly and you knew it.

“Milton was a great blessing to everyone who knew him,” Rev. Corbett continued. “I have only been pastor of Center Grove for a year, but he has been a blessing to me and I’m thankful for the opportunity to have known him.”

Morris is survived by his wife, Pam Morris; a daughter, Sherri L. Morris and her husband, Eric B. Jernigan of Wake Forest; a son, Michael Ray Morris of Aulander; and two sisters – Marian Smithwick of Franklin, Va. and Joann Sharber of Kinston.

A Celebration of Life service will be conducted at 11 a.m. today (Thursday) at Center Grove Baptist Church. Rev. Corbett and the Rev. Alan Mizelle will officiate. Burial will follow in the Hoggard Memorial Cemetery in Lewiston-Woodville.