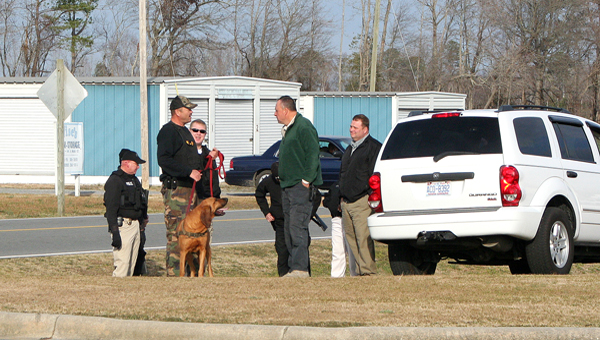 Local law enforcement officers and a tracking dog are seen in the area of a Tuesday morning robbery in Murfreesboro. Staff Photo by Amanda VanDerBroek

MURFREESBORO– Law enforcement officers here are investigating what appears to be a strong-armed robbery  early this morning.

Details are not complete at this time, but the Roanoke-Chowan News-Herald has learned that three males forced their way inside Advance Auto, located on US 158/258 Business at theFoodLionShopping Center, around 7 a.m.

All three suspects were dressed in black hoodies and their faces hidden by a bandanas. Two suspects were reportedly carrying what were described as “long guns.”

No injuries were reported.

The News-Herald will have more on this story as information becomes available.