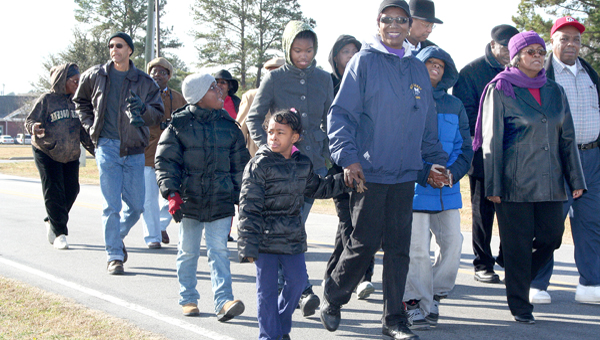 Monday’s tribute to Dr. Martin Luther King Jr. in Jackson featured a march from the Northampton County Public Works Department to the Cultural and Wellness Center where a brunch and program took place. Staff Photo by Amanda VanDerBroek

JACKSON — With the echoes of “We Shall Overcome” in the chilly morning air and the crunch of gravel beneath foot, each step they took pushed the legacy of Dr. Martin Luther King Jr. into the future.

On Monday, Northampton County residents gathered for the 12th annual Dr. Martin Luther King Jr. Birthday Celebration in tribute to the late Civil Rights leader’s life. The event, held in Jackson, kicked off with a march down NC 305 from the Northampton County Public Works Department to the Cultural and Wellness Center, where the participants took part in a brunch as well as listened to music and speakers.

Marjorie Edwards served as mistress of ceremonies for the event organized by the Dr. Martin Luther King Jr. Planning Committee.

The Reverend Dr. Conrad Kilpatrick Pridgen, the presiding elder of the Western District of the A.M.E. Western North Carolina Conference, was the messenger of the program.

At the core of Pridgen’s speech was King’s 1968 “Drum Major Instinct” sermon in which King encouraged his congregation to seek greatness, but to do so through service and love. Pridgen tied that message as well as to the Gospel of Mark (10:43-45) and the life of Jesus Christ.

“Dr. Martin Luther King’s life was a life of service and he was original with it—this passage let’s us know that he went to the Bible and found Jesus, the great servant,” he said. “I like that 45th verse, the 45th verse starts with the word, ‘For even, the Son of Man came not to be served, but to serve and to give his life as a ransom for many’.”

Pridgen said that many know today that difficult days are ahead. He spoke about the current political atmosphere and those that were not for the best interest of the majority.

He also spoke about the importance of seeking “higher ground” despite what difficulties come.

“I believe I heard a prophet back in the year 1968 say that we have some difficult days ahead, but it’s alright. I’ve been to the mountain top,” he said. “But even though we had difficult days ahead he had already given us so many things to help us make it through difficult days, and one of them was this sermon.”

Pridgen also referred to Jesus and Christians being oppressed by the Romans. He said Jesus, while speaking with his disciples, encouraged them not to utilize the same patterns, strategies and techniques as their oppressors.

“You have to move to higher ground,” he said. “You have depend on God, you have to use God’s weapons not your enemies’ weapons. …If you want to be great, the thing you have to do is serve.”

Pridgen referred back to King’s sermon where the Civil Rights leader said he wanted to be remembered as a person who gave his life serving humanity. Pridgen said serving goes along with ambition and noted that serving as well as hard work is required for everyone.

“There’s nothing wrong with ambition, but I like what Dr. King said, ‘Our ambition should be to serve’,” he said. “Dr. Martin Luther King let us know that you can have a regular job and be somebody. You don’t need a prestigious job. We ought to tell our children that sometimes you’ve got to start somewhere.”

Pridgen said everyone should strive to be the best no matter what occupation they have and to specialize in the gift they have been given. He also encouraged the audience to help others.

“If you serve and serve well then you need to realize that God wants you to think about someone else,” he said. “You can’t just serve with a ‘me’ attitude. You’ve got to serve with a ‘we’ attitude. It can’t be just about you.”

Spruill said the audience was there to commemorate “the birth and life of a man who made us believe in ourselves and better nature of humankind.”

“We’re here to celebrate the life of a man who gave the ultimate human sacrifice for the cause of social and economic justice, unity and equality,” she said. “It is proper then that we celebrate this day as Dr. King was a drum major for peace and justice throughout the world.”

Taylor called for unity in the pursuit of common interests.

“Forward together, not one step back,” he said. “We must stand for freedom and defend democracy. We will not be defeated or divided. We shall pursue liberty and justice for all.”

Local law enforcement officers and a tracking dog are seen in the area of a Tuesday morning robbery in Murfreesboro.... read more