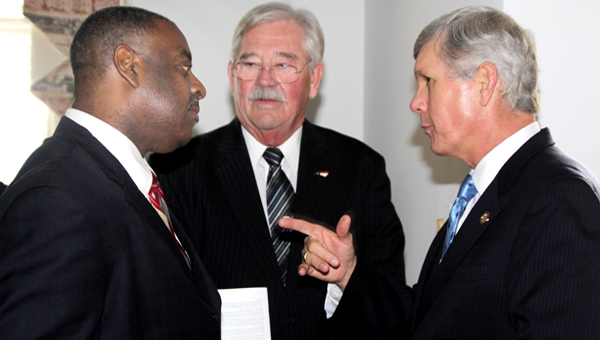 MURFREESBORO — For more than two centuries this small town on the banks of the Meherrin River has stood as a place of faith, commerce, education and community.

On Thursday, local and state dignitaries along with citizens alike celebrated as Murfreesboro added one more year to that tally.

January 6 marked 225 years ago that 97 acres of land adjoining the Meherrin River was given by William Murfree for a town that was to be called “Murfrees Borough” and now known as Murfreesboro.

The 1787 General Assembly act calling for the establishment of Murfreesboro cites how those from the surrounding counties prayed for the creation of the town because it was “convenient to a country which produces large supplies of tobacco, corn, pork and lumber for exportation and that the convenience for shipping produces at this landing is greatly superior to what is generally found at other landings.”

Those gathered at Murfreesboro’s 225th Anniversary Celebration listened to Lt. Governor Walter Dalton recall that successful history and how it will help carry Murfreesboro into the future.

Mayor John Hinton kicked off the program thanking the large crowd seated at Turner Auditorium on the campus of Chowan University for their attendance.

“We appreciate you taking time from your schedules, as busy as they might be, to celebrate the 225th anniversary of Murfreesboro,” he said.

Hinton also thanked Dalton along with “the four pillars of community,” including the town of Murfreesboro, the Murfreesboro Historical Association, Murfreesboro Chamber of Commerce and Chowan University.

Lynn Johnson, a former mayor, read from the town’s charter that was drafted in 1787.

“It’s quite an achievement,” he said “Also, Chowan University is pleased to be a part of Murfreesboro. It has been for more than 160 years.”

White introduced Dalton by saying he is “a proven leader with a passion for education and innovation, with a track record with getting things done for the citizens of North Carolina.”

Prior to Dalton’s election as lieutenant governor, he served six terms in the North Carolina Senate. Among Dalton’s achievements in education are helping to reduce classroom sizes, bringing accountability back into classrooms and increasing teacher pay. He authored the Innovative Education Act and created the state’s early college system. Dalton has also been a supporter of economic development, affordable healthcare and protecting the environment and natural resources.

Lt. Governor Dalton recalled the historic roots that run deep in Murfreesboro and in the state.

Dalton noted in the 16th century John White made his way through the area and General Lafayette as well during the Revolutionary War.

He noted the town’s charter was “interesting legislation.”

“It shows that this area was a hub of commerce,” he said. “It talks about the tobacco, the corn, the pork and the lumber. …This was a center for exportation and a center for shipping.”

Dalton spoke of the area’s mainstay, agriculture, that is celebrated annually with the Watermelon Festival and the Pork Fest. He noted how the state’s largest economy is agribusiness, which accounts for $74 billion in economic impact in North Carolina. He said that economy will continue to grow and thrive as the world’s population continues to grow.

“It can be a huge economy for us in the future as it is today and you’re going to be a leader in that economy, you have been for over 225 years,” he said.

Dalton said though the town’s port of call went away and the community has faced hardships throughout the course of time Murfreesboro still thrives.

He spoke about local and national successes in the form of innovative inventions and milestones in medicine, science and technology.

“You’ve gone from a port of call to now a city, a town that has a great university, that has a vibrant community,” he said. “It’s because, I think, of your heritage that you have here, your great legacy that you have with your ancestors. You’ve provided great citizens for our country and for our state.”

Dalton pointed to many historic figures who crossed paths with the town and were involved with those breakthroughs, including Richard Gatling who invented the Gatling gun, Dr. Walter Reed who made advances in the yellow fever epidemic and Chief Justice William Harrell Smith.

“I think a key to your resiliency is the fact that you have roots in faith and roots in education,” he said. “And we know with knowledge comes power.”

Dalton noted North Carolina was one of the first states to have a public university system and how Chowan University has been a leader for years.

The lieutenant governor gave a nod to the town’s early educational efforts with the Wesleyan Female Institute and the Chowan Baptist Female Institute, the latter of which gave way to Chowan University.

“You have to realize that was very progressive thought for that time in our history, to have two female institutions so close by, to give that opportunity,” he said. “You have been a leader on diversity issues.”

He added Chowan means “people of the south,” appropriate terminology for those in Murfreesboro.

Dalton said Murfreesboro continues to adapt and change and those in the community continue to grow together and reach their potential.

Following his speech, Dalton was presented with a “key to the city” by Hinton. Invocation and the benediction were given by Mari E. Wiles, minister to Chowan University, and Councilwoman Gloria Odum, respectively.

A reception was held at the Hertford Academy following the program.