The results are finally in.

The 2011 edition of the Gridiron Gurus is complete and a winner has been crowned.

That champion is none other than News-Herald Analyst and private school guru Mike Williams who correctly picked 108 games this season. He was 108-29-1. 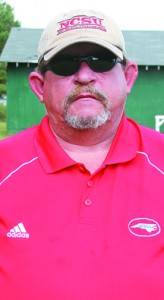 That total narrowly edged out News-Herald Analyst and “Talkin’ Sports” host Gattis Hodges who was correct in 107 contests.

Next in was retired Bertie High School Athletic Director and Head Football Coach Ron Cooke who finished 98-49-1 this season. He edged out Senior News-Herald Sports Writer Billy Harrell who was 96-51-1.

News-Herald Multimedia Manager Patrick Bryant was next with a 93-54-1 mark as he edged out a pair of forecasters in News-Herald Managing Editor Thadd White and the Voice of the Falcons, Roanoke-Electric Cooperative Vice President Marshall Cherry. They were each 91-56-1.

Chowan University Deputy Athletic Director Meredith Long and WDLZ-FM Broadcaster Trent McGee were next with a final mark of 90-57-1. They edged out Gatesville Mayor and retired Gates County High School football coach Elton Winslow and Hertford County Baseball Coach Chris Towell, each who was 89-58-1 this season.

Next was Hertford County Commissioner Howard J. Hunter, who is the President of Hunter’s Funeral Home. He was 88-59-1.

The final spot went to News-Herald Sports Writer Willie McLawhorn, who inherited a losing record when former Publisher Michael Leonard left the newspaper. He rallied to close out the year 81-66-1.