Two men are behind bars on rape charges in separate incidents, according to the Bertie County Sheriff. 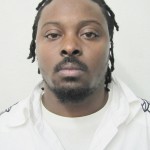 Dustin Blake Davis, 18, of N.C. 561 East in Ahoskie was arrested on Dec. 21 and charged with first degree rape, indecent liberties with a minor and contributing to the delinquency of a juvenile.

He was placed in the Bertie-Martin Regional Jail under a $500,000 bond.

Arrested in a separate incident was Thomas Jermaine Valentine, 30, of Meadow Road in Colerain. Valentine was taken into custody on Dec. 26 and charged with statutory rape and taking indecent liberties with a child. His bond was set at $500,000 secured.

Three days later, a warrant was served on Valentine for intimidating a witness for the same case by contacting the victim via from the jail. He was placed under an additional $25,000 cash bond on that charge.

Holley said investigation is continuing in both cases.