KILL DEVIL HILLS – Mark Evans was first bitten by the public service bug at the young age of 14.

Now, 25 years later, that deep seeded commitment within his soul continues to burn passionately to help others, so much to the point where he recently spent 11 weeks of intensive training at the prestigious FBI National Academy. 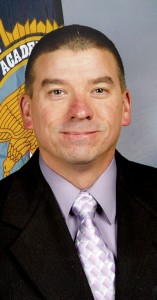 Evans, an Ahoskie native who is currently a Captain within the Kill Devil Hills Police Department, graduated Dec. 16 from the Academy’s 247th Session in Quantico, VA.  That training session consisted of 266 law enforcement officers from 49 states, the District of Columbia, 25 international countries and three military organizations.

“Traditionally, only about six-to-seven law enforcement officers are selected annually from each state to attend the Academy,” Evans said, adding that he was nominated by his Chief. “Some spend a decade or two on a waiting list to be accepted.”

Internationally known for its academic excellence, the National Academy program offers 11 weeks of advanced investigative, management, and fitness training for selected officers having proven records of professionals within their agencies. Captain Evans is among 45,297 graduates that represent the FBI National Academy since it began in July 1935.

“Without a doubt, it was the best training I’ve ever had in my career, especially from a managerial and executive level standpoint,” Evans said. “There were top-level law enforcement training officials there from all over the world.”

Despite being a family man, Evans didn’t hesitate to spend nearly three months away from home in an effort to make himself a better law enforcement officer.

“I’m a firm believer that your education never stops, especially if you are trying to position yourself to take that next step up the career ladder,” he stressed. “The FBI National Academy is the premier law enforcement school in the world. The training I received puts me in position to seek the job of a police chief or sheriff when or if those opportunities become available.

“Plus, the national and international networking opportunities developed at training sessions such as this are extremely valuable,” he added.

Evans launched his career as a public servant when he joined the Ahoskie Rescue Squad in 1986 and spent 10 years with that organization, from where he was honored in 1991 with the Governor’s Outstanding Volunteer Service Award. He also was a volunteer member of the Ahoskie Fire Department from 1990-96.

Upon graduation from high school, Evans landed a job as a dispatcher for the Ahoskie Police Department. He served in that role from 1990-93, eventually becoming an Ahoskie Police Officer (1993-96).

Evans moved to the Outer Banks in 1996 where he joined the Kill Devil Hills Police Department, rising to his current-day rank of Captain and Supervisor of the Patrol Division.

He remains an instructor with the American Red Cross, a position he originally volunteered for in 1997.

He has been married for 15 years to Lisa Evans, a native of Winton, and they have two children, Haley (12) and Colby (8). His parents are Leslie J. Evans Sr. of Kill Devil Hills, formerly of Ahoskie, and the late Jeanette B. Evans. His sister, Terry E. Lassiter of Ahoskie, and brother, Leslie Evans Jr. of the Elm Grove community, still reside in the Roanoke-Chowan area.

GATESVILLE – Despite a national economy slow to recover from the financial crisis of three years ago, Gates County local... read more