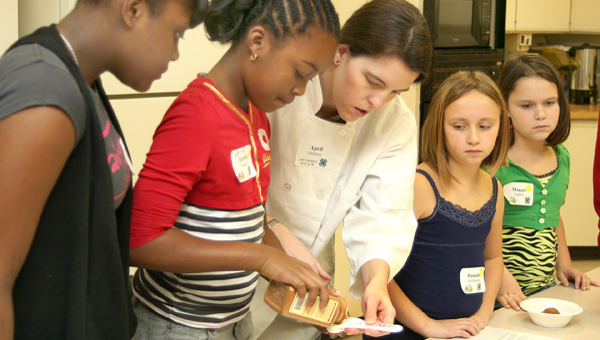 Northampton County 4-Hers kicked off their holiday season with festive activity workshops held on Thursday at the Faison Administrative Building in Jackson. Pictured from left are Damiaya Cheek, Apriella Warren, 4-H volunteer April DeBerry, Hannah McDermott and Maggie Adams as they whip up a batch of cinnamon swirl bread. Staff Photo by Amanda VanDerBroek

JACKSON — Northampton County 4-Hers got into the Christmas mood with a little hands-on education.

On Thursday, approximately 30 children ranging from ages five to 12 participated in 4-H Christmas Workshops at the Faison Administrative Building.

According to Caroline Brown, Extension agent for Northampton 4-H Youth, they office tries to hold a workshop before Christmas each year.

“It brings them together for some fun and education during their holiday break from school,” she said.

Brown said these particular workshops go along with those aspects 4-H strives to instill in young people, including healthy eating and promoting the development of life skills.

Brown said the state’s 4-H theme this year is “Hungry to Help” and Northampton tailored that theme to include volunteerism.

Lawrence worked with the children as they made homemade cinnamon swirl bread using wheat bread.

“We try to make it fun for the kids so they don’t know they’re getting an education,” she said.

On Thursday morning, the 4-Hers were excited about singing carols for the residents at Hampton Woods.

Kenley Moore and Brianne Flythe said they have sung for assisted living residents before and were looking forward to doing it again.

“I like to sing and it just sends joy to them,” Moore said.

Helping to spread some Christmas cheer was what Flythe was looking toward the most.

“I like it because I get to see people and help them feel better,” said Flythe.

Another Northampton 4-H activity during the week was sponsoring a blood drive at the Northampton County Cultural and Wellness Center.

Brown said 4-Hers recruited and assisted with the drive which had a goal of 46 pints. The group fell just short of that goal with 34 pints and seven potential donors deferred.

Brown said despite missing the goal she was happy with the drive.

“This time of year is a critically low donation time for (the American Red Cross),” she said. “We really appreciate those who came.”

Peter Woglom poses with “Spike” in the front yard of his home in the Trap community of Bertie County. Staff... read more