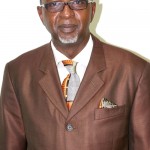 “Thank you for your trust in me,” Rascoe said. “I will do my best not to let you down.”

Rascoe replaces outgoing Bertie County Manager Zee Lamb, whose last day on the job will be Thursday. He will be employed with the county through Dec. 31, but will be on holiday or vacation the rest of the time he is on staff. Lamb will become the Chowan County Manager in January.

Following a closed session to discuss personnel, the board reconvened to discuss their administrative leadership.

Commissioner Rick Harrell made a motion to appoint Rascoe Interim County Manager through July and increase his salary by two percent. Commissioner Charles L. Smith offered a second and the motion passed without objection.

The board also directed County Attorney Lloyd Smith to prepare a contract for Rascoe in his new position.

Commissioner Norman M. Cherry Sr. made a motion to promote Deanes to her new job and increase her annual compensation to $50,000 per year. That motion also passed on a unanimous vote.

Smith is also to prepare a contract for Deanes.

“Thank you for your confidence in me as well,” Deanes said.

The board also discussed the Emergency Management Coordinator post which has been vacant since the resignation of Rickey Freeman earlier this year. Deanes has served as an interim in the job.

Harrell moved to readvertise the position until January 17. The committee will then look at all applications and make a recommendation to the commissioners.

Harrell said his motion would include continuing to have Deanes serve in the interim.

The promotion of Rascoe also led to a change in the direction of the Bertie County Department of Social Services.

Rascoe said the DSS board met and named Cheryl Mizelle and Linda Speller Interim Directors of DSS during the time he serves as Interim County Manager.

The Bertie Commissioners also agreed to hold off on advertising for a new county manager until March or April of 2012.

WINDSOR – The Bertie County Board of Education took an unusual route to a new vice chair Dec. 6. That... read more