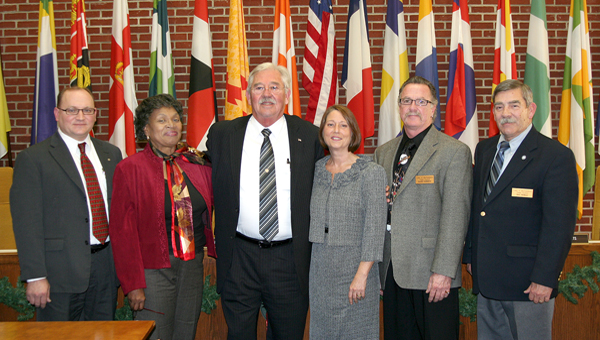 State Senator Ed Jones swore in newcomers Hal Thomas, Randy Roberts and Craig Dennis as they began their terms on the governing board.

Councilwomen Sarah Wallace and Gloria Odum, who both won their bids for reelection, along with Mayor John Hinton, who ran unopposed in the November election, also took their oaths.

“Just remember that sitting as a body your decisions affects everyone in this town,” said Jones before he administered the oaths. “Make changes in people’s lives so they can live better.”

Wallace was selected as Mayor Pro-Tempore by her colleagues.

Later in the meeting, Roberts and Thomas thanked voters for their support.

“I just want to say thank you to the townspeople for selecting me and giving me this opportunity,” said Roberts.

“Thank you to all the good citizens of Murfreesboro coming here to see what goes on in council meetings,” he said.

Thomas added he hoped to see more “smiling faces” at the evening meetings.

In other council appointments, Hinton re-appointed Lynn Johnson to the Mid-East Commission and Town Administrator Brandon Holland as an alternate to the position.

With his wife, Renee, holding the Bible, Brien Lassiter takes the oath of office as Mayor of the Town of... read more