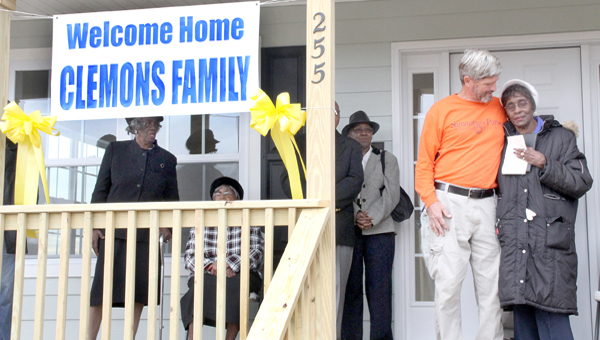 COLERAIN – Just as they did on April 16, the clouds thickened for a brief moment here Friday afternoon, Dec. 9 along a stretch of Morris Ford Road in Bertie County.

However, the sun emerged, this time around shining brightly on two new homes rebuilt in the aftermath of a trail of death and destruction left in the wake of that tragic mid-April day.

Twelve Bertie County residents lost their lives as a result of the April 16 tornado, making it the deadliest storm in Bertie County history. Pearl Clemons and Lucille Harrell dodged death that day, but lost their homes when a three-quarter-mile wide twister hop-scotched its way across the rural countryside.

Nearly eight months later, the two women stood proudly on the front porch of their respective new homes, both the product of a small army of volunteers working under the broad umbrella of Samaritan’s Purse, an organization based in Boone, NC that provides emergency relief programs to victims of natural disaster, war, disease and famine.

Those volunteers were in Bertie County on the morning after the storm. Among them was a local native, Artie Johnson who serves Samaritan’s Purse as a Case Manager and Logistics Coordinator.

“We started this rebuilt project on Morris Ford Road the second week of August,” Johnson said. “What you see here is volunteer labor and materials. The homeowners used whatever settlement they received from insurance and/or FEMA money. Samaritan’s Purse took care of the rest through donations.”

The labor was supplied through the blood, sweat and tears of volunteers who came from near and far. There were contractors involved for electrical, plumbing and HVAC in order to meet all mandated housing codes.

Neither family suffered loss of life during the tornado. Clemons was at home when the storm arrived, but was not injured. The tornado picked the house up and set it back down, crushing the foundation.

Harrell’s storm story was quite different. She was hospitalized for treatment of a medical condition in mid-April. However, her two grandchildren, who live with Harrell, were at the home on April 16.

The grandchildren obliged, a decision that perhaps saved their lives as Harrell’s mobile home was completely destroyed.

Karina Petersen, a spokesperson for Samaritan’s Purse, said the two new homes on Morris Ford Road were the first of eight total construction projects in Bertie County. She said the plan was for the group to be “on the ground in Bertie County for up to one year and build 10 homes for tornado victims.”

“These are for individuals who lost their homes and do not have the means to rebuild,” Petersen said. “Mrs. Clemons told us she had some money, but joked that it would perhaps be enough to build two steps. Her home has been in her family for three generations, so for her this was important to rebuild on that same property. It means a lot for her to be here.”

Not only did these two particular storm victims receive the keys to their new homes, they gained a framed sheet of paper that meant even more. At the bottom of an itemized list of construction costs and materials were the words, written in red, “Paid in Full.”

Petersen said the emotions of those involved in the Samaritan’s Purse project ran the full gamut. Some, like her, were in Bertie County within 24-to-48 hours after the storm. The relief effort in the aftermath of that storm was broad in nature, initially dealing with short-term help, to include grief counseling, followed by long-term recovery efforts, such as rebuilding homes. Volunteers flocked to Bertie County from numerous states, even those out west, as well as a few from foreign lands.

“What was most awesome about this whole ordeal was to see just how strong, how resilient, the people here are,” Petersen noted.

“All that has been done here on both homes by these volunteers has been accomplished through the glory of God and we give him all the glory and praise,” said Andy Beauchamp, Construction Supervisor for Samaritan’s Purse. “I don’t consider this work as a sacrifice. I have enjoyed doing this work more than anything I’ve ever done in my life. I thank Samaritan’s Purse for allowing me the opportunity to work with them.”

Both women were presented with a journal containing notes and well wishes from the countless volunteers that worked to rebuild their homes and, more importantly, their lives.

“Thank you everybody and thank God,” said Clemons who, with tears of joy, began singing, “Walk with Me, Lord.”

“I just don’t have the words that can come out of my mouth to let ya’ll know how I feel in my heart,” Clemons continued. “Thank God that he was able to give all of ya’ll the strength to come and build my house back. Now I can lay down in my bed and night and not have to worry that someone will come and knock on my door and tell me to get out.

“People came from all over….London, England, Michigan, Ohio, Arizona…all the places that you came,” she added. “I may not know all of you by name, but I’ll never forget the faces and I thank God for all of you and I love each and every one of you. Someone needs to pinch me to make sure this has all happened to me.”

“I don’t want anyone to ever forget what happened here, the devastation that came through this neighborhood will live with us all,” said Clemons’ daughter, June. “There are those who lost family members, which means far more than just losing a house. But because of Samaritan’s Purse, we have our home back and I’m so grateful.”

“Thank you all, not just one, everybody,” said Harrell. “This has really brought joy to my heart. I couldn’t have asked for people no better than the ones that built my home. When they came we got together and had prayer in my yard. I am so happy and so blessed.”

One who will never forget the tragedy of April 16, 2011 is Luther Harrison, Vice President of North American Projects for Samaritan’s Purse.

“The last time I saw this many cars lined down Morris Ford Road was right after the tornado,” Harrison said. “My phone rang on the morning of April 17. It was (Samaritan’s Purse founder) Franklin Graham. He asked what we were doing on these tornadoes. I told him we were sending trailers to Fayetteville, Sanford and Raleigh. The first thing he said after asking that first question was what were we doing in Bertie County. He said he wanted me to go to Bertie County. I was given a tour of the damage and devastation. I remember seeing the damage right here, parts and pieces of homes scattered all over.

“The parable of the Good Samaritan in the Bible contained the phase, ‘What must I do to inherit internal life.’ Jesus replied, love your neighbor as yourself,” Harrison added. “That day that we came to this county we saw neighbors helping neighbors pick up the pieces. We just came in and added to that (effort). We thank God for the donors that help us financially, but we can’t rebuild these homes without the volunteers. What we see here is that the list of our neighbors just grew….all the strangers that came in to help rebuild. That’s what that Biblical parable is all about.”

Each new homes contains a safe room, a concrete room with a steel door that’s built in the center of the house for use as shelter from possible future storms.

If those storm clouds do gather, locals such as Clemons and Harrell will be ready, just as Samaritan’s Purse will be prepared once again to answer the call for help.

AHOSKIE – Five straight and counting. Ridgecroft School started the season 2-2, but the Lady Rams have now rolled off... read more