‘Home for the Holidays’ 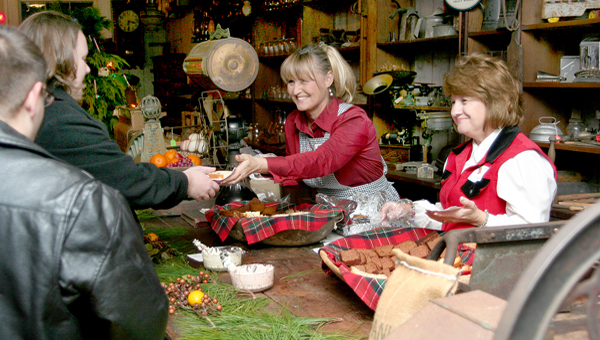 MURFREESBORO — Twenty-six years since its inception, the Candlelight Christmas Tour is still drawing hundreds each year.

On Thursday and Friday approximately 600 visitors took part in the progressive dinner that escorts tour-goers to a handful of Murfreesboro’s historic jewels. “Home for the Holidays” was this year’s theme for the tour organized by the Murfreesboro Historical Association.

Participants visited 12 sites on the tour, including well-known historic properties such as the Roberts-Vaughan House, the John Wheeler House and Hertford Academy.

In addition, two new sites, the Ella Cobb Camp President’s Home and the Melrose House, were open to the public for the first time.

The Ella Cobb Camp President’s Home, located on Chowan University’s campus, was completed in 1989 and is the home of Chowan’s current President Dr. Christopher White.

Meanwhile, the original part of the Melrose House was constructed in the late 1700s or early 1800s and was home to William Hardy Murfree, the son of Hardy Murfree who donated 97 acres of land for the incorporation of the town. The home, currently owned by the Rollman family, is currently up for sale.

“We try to have different homes each year,” he said.

Woodard said there are various factors as to why the event is such a success and why many return for the tour year after year.

“Part of it is reputation, a lot of it is word of mouth,” he said.

Sandra Fowler, tour director, said an interest of history and the historical site managers’ knowledge of that history is also part of the tour’s lure.

“They come one time and they want to come back,” she said.

The historic sites were decked out in all-natural Christmas decor and small meals, including crackers and cheese, fresh roasted peanuts and seafood bisque, were offered at different sites. Guests enjoyed a larger meal toward the end of the tour at the Murfree Center before completing the event with dessert at Hertford Academy.

George and Yvonne Barnes of New Brunswick, Canada, who are visiting their daughter who lives in the area, decided to take the tour after seeing it advertised in the Roanoke-Chowan News-Herald.

“We decided to come and see some Southern homes,” said Mr. Barnes. “We’re interested in the history and the homes.”

Next year’s theme for the tour will be the Magic of Christmas.