JACKSON — The suspicious death of an elderly man has now been determine as a homicide and the arrest of a suspect has been made.

According to Northampton County Sheriff’s Detective Lt. Brenda Burnette, Rosa Shoulders Champion, 51, has been taken into custody for the death of Martin Powell, 70. 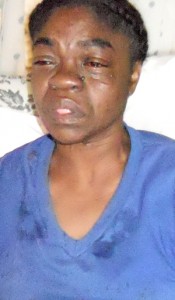 Burnette said Champion was an acquaintance of Powell and was living with the victim at his residence.

Champion has been charged with second degree murder and placed in the Northampton County Jail on a $250,000 secured bond. Her first court appearance is scheduled for Thursday.

Last week, law enforcement discovered the body of Powell at his residence on Bryantown Road near Jackson after being summoned to the scene by a neighbor.

The NCSO along with the State Bureau of Investigation (SBI) investigated the case. Burnette said through the autopsy and other evidence, Champion was singled out as a suspect.

“Everything led toward her (Champion),” said Burnette.