There has been a lot of excitement in the athletic department at CU over the past couple of weeks. 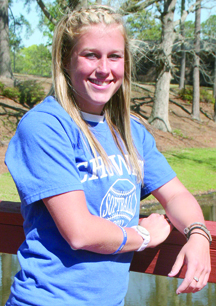 We’ll start with the Women’s Basketball team: Awesome home opening win against St. Andrews Presbyterian College!  Freshman Summer Curtis broke the CU single game record for blocks…she tallied eight in the game.  Talaya Lynch, T’Arra Cutting and Janelle Murphy all scored double digit points in the contest.  It was a fun game to watch, and I’m excited to watch them play at home again on December 6 when they host Barton College.  Tip-off is set for 5:30 p.m.

Now to the Men’s Basketball team…  Antonio Reddic continues to dominate on the court.  In the home opening win against the Apprentice School he earned his fourth double-double of the season.   Four double-doubles already!  They’ve only played seven games.

Reddic was named CIAA Player of the Week (week of 11/20), and Newcomer of the Week after tallying some impressive stats during the first three games of the season. The Hawks are home again this Saturday.  They play Allen University at 2 p.m.

The Football team had another successful “Two for Turkey” campaign this year.  They were able to raise over $300 in donations towards Thanksgiving dinners for local families.

The volleyball and softball coach have racked up a few awards lately.

Volleyball coach Peter Green was named 2011 CIAA Volleyball Coach of the Year.  Congratulations Coach Green…the volleyball team has been very successful over the past several years, and your leadership has definitely contributed to that.

Softball coach Mandi Balduf attended the National Fastpitch Coaches Association Convention (NFCA) this week which was held in Las Vegas.  At the convention, Coach B was honored for earning her 100th Career Win last season (which was captured on Senior Day vs. Elizabeth City State (March 17, 2011). In addition, she was recognized for her role in coaching a softball team that was ranked in the NFCA DII Top Ten in terms of GPA for the previous academic year.  Congratulations Coach- your team is proud to play for you!

Let’s talk about the Sapphires….our cheerleading squad.  They are so supportive of the men’s and women’s basketball teams, and they work really hard to entertain the fans and keep everyone pumped up during the games.

On Saturday December 10, the Sapphires will be hosting a one-day cheer camp.  This is a great opportunity to meet the squad, and give your children a chance to learn from the best!  The camp is for children ages four and up.  It will be held on campus from 9 a.m.- 2 p.m.  Cost is $20 per participant.

At 1:30 p.m., after an day of learning cheers and dances, participants will get the chance to show off their skills in an exhibition open to parents/spectators.  Sign your kids up for this!  Don’t wait!  Visit www.gocuhawks.com for additional information.