The veteran administrator took over Nov. 8 after accepting a transfer from his role as Principal of Colerain Elementary School. Having once served as co-principal of Bertie High, Eley said he felt like he was coming home.

Upon arrival, he found a staff and student body that was ready for a new principal who planned to be on board for a long time.

“There are some non-negotiables that I changed almost immediately,” Eley said. “I told our staff that kids are accountable for their actions and that I believe if kids understand you expect them to do their best, they will.” 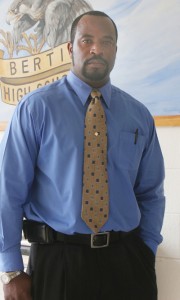 Bertie High School Principal Rickey Eley was recently transferred from within the public school system to take the helm of the county’s largest educational facility. Staff Photo by Thadd White

Other than the high expectations, Eley said he made some “housekeeping” changes, but didn’t make any sweeping modifications.

“Had I been here July 1, there are some things we would have done differently,” he said. “At this point we are about one-third of the way through the year and people are used to certain things. I’m not going to make key changes in academic areas at this point. The things that are in place are manageable until the end of the year.”

Eley said the students at Bertie had met him in his first few days and made it clear they were ready for a principal that was going to be with them throughout the year.

He said the one-on-one meetings had also gone well.

“I think students find that I’m a fair person,” he said. “I treat them like young adults and I talk to them and explain the way things work.”

Eley said it was the students that would be his focus and that he would work with teachers to make sure that was always true.

“In education there is a lot of lip-service to saying we do everything for the children,” he said. “It’s my job to make sure we don’t just say that, but that we are doing everything we do in the best interest of our students.”

That begins, he said, by getting everyone on the same page academically.

“First and foremost, I have to make sure the adults in the building understand what DPI (Department of Public Instruction) and the Bertie County Board of Education says we have to do as it relates to policy, procedure and academics,” he said. “Bertie High School has made great strides academically over the past few years and I want to build on that.

“Kids do what teachers allow and if our teachers are believing in students and preparing well for their lessons, the academics will take care of themselves,” Eley continued. “Kids want to be successful. Some you have to push more aggressively than others, but they all will move toward success if you help them.”

The new principal said those same high expectations would be across the board.

“The teachers have to expect success from every student,” he said. “We can’t just expect it from one part of the county or only from black students or only from white students.

“It starts with me,” Eley continued. “I have to have high expectations of teachers and students and hold both of them accountable. That is a major focus of what I will be doing; not the main, but a major focus.”

Eley said students have to be well-rounded and achieve not only academically, but socially.

Another key focus for Eley will be earning even greater support from the community.

“Bertie High School is a pillar of this community,” he said. “We were blessed in Colerain with a community who supported the school and we need that same support at the high school. We need support not just from parents, but grandparents and the community.”

The new principal said he wanted the support not for himself, but for the students and staff at the school.

“People may not like my leadership style and some people may not even like me personally,” he said. “It’s not about me. It’s about our students and the fact they are the ones who will go on to make Bertie County an even better place.

“If we don’t have that support it’s like we are in a fight by ourselves,” he added. “It’ much easier to do it together.”

While the main focus of his administration is academics, Eley is also a former coach and athletic administrator who is concerned about the school’s sports program.

“As far as athletics, that is another piece of making the school successful as a whole,” Eley said. “When I was here before we were successful in all areas of athletics. It is a huge part of both the school and the community.”

“I want to see all of our teams compete at the regional and state level,” he said. “We have work to do in a few sports. We are being successful in others, but not overall where I want us to be.”

Overall, Eley said he was pleased to be back home at Bertie High School and invited the community to join him at their school.

JACKSON — New details about the formation of Eastside EMS has come forth after the group was granted a franchise... read more