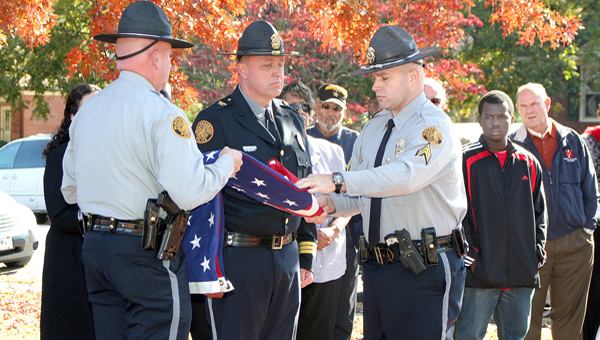 MURFREESBORO — The date 11/11/11 may only come once in a lifetime, but the purpose for November 11th always remains the same.

On Friday, citizens gathered here to honor the war veterans who have defended our country throughout the years and those who continue to do so.

Smith spoke about the beginnings of Veteran’s Day, which began first as Armistice Day declared by President Woodrow Wilson in 1919, one year after World War I. The major hostilities of that war ended on the 11th hour of the 11th month of the 11th day of 1918.

“This was a day to reflect in the heroism of those who died for the country’s service and for gratitude for their victories,” Smith said.

Smith spoke about how Americans can forget to be thankful for the liberties in the United States and those who defend it.

Smith said it’s too often that the country vows to never forget hostile events, but soon after time people do forget. He outlined the wars in the nation’s history and the times of peace that followed and the forgetfulness of the cost.

“For many veterans that virtue of peace has been the basis for which we have served our country,” he said.

Smith said as a commanding officer he knows many of the younger generation are willing and ready to take the challenges of the 21st century. He called on the public to embrace the service members of today’s generation.

“For many there are no big parades, no big processions, just grateful family and friends who warmly welcome them back home,” he said. “We need to be sure they welcome their military service and to engage them to keep the spirit of Veterans Day alive.”

George Wilson spoke about the Roanoke Valley Veteran’s Museum in Roanoke Rapids, which has collected 1,500 photographs of veterans in three years and displays those photos along with various artifacts. The museum also honors an area veteran each month.

“A veteran comes in and says, ‘What’s the purpose of this,’ and I say, ‘It’s to honor you, to honor all veterans that have served the country’,” Wilson said.

Wilson spoke about French boxcars, also known as forty-and-eights and merci boxcars, which were used as troop transports as well as for freight during both World Wars.

Wilson said when Murfreesboro World War II veteran Joe Dickerson was selected as the museum’s veteran of the month in October he learned Dickerson had rode in one of the French boxcars in France in 1943-45.

Wilson presented Dickerson a snow globe with a French boxcar inside in appreciation to his service to the country.

Murfreesboro Mayor John Hinton welcomed those in the audience to the Veterans Day celebration.

“It’s a day in which we celebrate the renewal of a common bond, and that common bond has joined together the American warriors since the day of George Washington when he crossed the Delaware,” he said. “That common bond is courage.”

Hinton said although the crowd had assembled to honor the men and women who have served and those who are currently serving to preserve freedom, they also recognize their courage.

“Courage mustered quite often in the face of adversity, not only to carry out the mission, but in some cases simply to survive just to reach the objective,” he said. “Courage is in that innate quality that is found in each one of us that helps us to overcome fear. So today we honor those men and women whose courage has strengthen them and through their strength they have preserved our freedom.”

During the ceremony veterans who served in World War II, Korea, Vietnam, Desert Storm, Afghanistan, and Iraq were recognized for their service.

According to David Farnham, who introduced the featured speaker, Commander Smith began his career by enlisting in the United States Marine Corps in October of 1980. After boot camp at Parris Island, SC, he completed cryptologic training at the Naval Technical Training Center at Pensacola and was subsequently assigned to Marine Support Battalion, Edzel, Scotland and advanced to the rank of sergeant.

In 1984, Smith switched services to the Navy and joined the Naval Reserve Security Group at Homestead as a crypotlogic technician 2nd class. He was an advanced to Chief Petty Officer in 1991 and received a direct commission as a Special Duty Officer in 1992. Smith served in escalating naval group assignments, including officer-in-charge and commanding officer at Orlando, Greensboro and Norfolk. He has also served as OIC in Japan, Hawaii and Italy.

In 2002 he was mobilized for Operation Enduring Freedom/Noble Eagle to execute a Maritime Concept of Operations, Project Aquador.