Five added to Hall of Fame 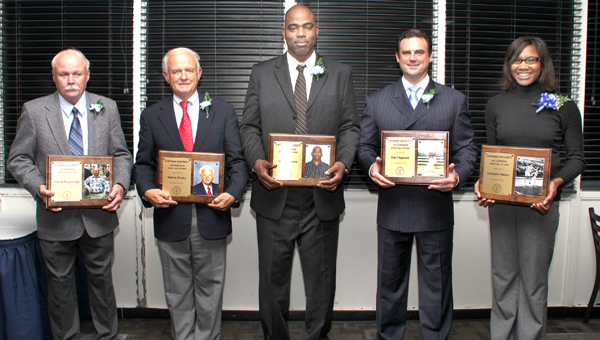 MURFREESBORO – The 111 plaques adorning the Chowan University/Jim Garrison Sports Hall of Fame represent the cream of the athletic crop.

“These are special people,” Chowan President Dr. Chris White said of the new inductees. “They were instrumental in helping Chowan gain national notoriety in athletics during the time they spent here and they all join a growing list of former athletes and athletic contributors that have made Chowan what it is today.

“Chowan continues to grow, athletically and academically,” White added. “We continue to make improvements to our campus, including our athletic facilities, and continue to grow our athletic budget at a time when Chowan is arguably experiencing its best time in our 160-plus year history.”

“LaChelle’s selection to the Hall of Fame is greatly deserved for a person that was not only a stellar athlete, but a great ambassador of Chowan University,” Flamini said. “She has impacted more lives than she’ll ever know. She was a natural leader, who led in the right way. Having the opportunity to coach her was one of the most rewarding experiences I’ve had in my 16-year career.”

Waller, who scored over 1,000 points and grabbed in excess of 1,000 rebounds over the course of her four-year CU career while maintaining Dean’s List or President’s List academic standards throughout, is now an Assistant Professor in the Center of Genomics and Personalized Medicine at the Wake Forest University Baptist Medical Center, with a shared primary appointment in the Transitional Science Institute. She received her PhD from Virginia Tech.

“I could not have done this without the support of my family, my friends and the amazing foundation provided to me by Chowan University,” Dr. Waller said upon accepting her Hall of Fame plaque. “I’m truly honored. I never imagined while playing basketball here that I would one day stand before you as a member of the Hall of Fame.”

Waller credited her success in life to the solid foundation Chowan provided.

“When I speak to kids across our country, when I was invited to meet the Queen of England, when I was the commencement speaker at Virginia Tech last year, it was great to say that I received my footing, my direction from Chowan,” she added. “Thank you to everyone who taught me so much while I was here.”

For Fitzgerald, coming south to a school he barely knew anything about later proved to be perhaps the best decision of his life. While he excelled on the baseball diamond for Chowan (a catcher who threw out 80 percent of runners attempting to steal while swinging the bat at a .400 career average), the school’s renowned Graphic Communications/Printing Technology program afforded him the chance to spread his wings. He currently serves as Group Imaging Director for Time Warner Inc. where he oversees the images that readers see on a daily basis through People Magazine, Entertainment Weekly, People En Espanol, Essence, InStyle, and People Stylewatch.

“I first met Fran in the fall of 1978 when we were freshmen here at what was then Chowan College,” said Charles Futrell of Murfreesboro who formally inducted Fitzgerald. “We had nothing in common, but somehow I felt comfortable around him. Now, more than three decades later, I consider one of my best and closest friends.”

“The knowledge and work ethic I attained while at Chowan is something that follows me to this day,” Fitzgerald said. “It really hit me on Friday when I came here to Chowan and spoke to about 25-to-30 Graphic students. It’s about giving something back. That was an honor and I’m humbled to stand here tonight, proudly beside my fellow Hall of Fame inductees, for this recognition.”

Fitzgerald said the friendships he forged while at Chowan as well as the quality education he received were the building blocks to his success. He took the time to thank former Graphic Communications professors Herman Gatewood (now deceased), Bill Sowell and Dwight Collier, as well as legendary Chowan baseball coach Jerry Hawkins.

“I have to pinch myself all the time to realize just how lucky a man I am,” he stressed. “I had no idea when I was younger that I would accomplish so much in life – from athletics to my career with Time Warner, and it all started right here at Chowan.”

Another northerner that found his way to Chowan was Kenny Reynolds. As Delaware’s High School Player of the Year in 1984, he caught the eye of then-Braves head coach Bob Burke and the rest, as they say, is history. During his two years in Murfreesboro, the Braves posted an overall record of 48-14. Along the way he scored 882 career points and dragged down 525 rebounds.  In 1986 he was invited to play in the National Junior College All-Star game in Midland, Texas.

“When I came here in 1980 it was our goal to build a national power in men’s basketball and we brought in a lot of outstanding talent over the years, including Kenny Reynolds,” said Burke, now retired as Chowan’s basketball coach, as he inducted his former pupil. “Kenny was as good, or better, than any forward that played here. His play, his work ethic and his dedication to his team was second to none. He did his talking on the floor and was one of the best to ever wear the blue-and-white.”

Reynolds, who finished his collegiate career at the University of Maryland at Baltimore County where he averaged 18 points and 11 rebounds per game over two season, was a man of few words upon receiving the esteem honor.

“First I want to thank God for this honor; my dad, my wife, and my brothers and sisters for enjoying this day with me,” he said. “I can remember the first time I set foot on this campus, I fell in love with this place. I learned so much here and enjoyed my time at Chowan.”

Coach Hawkins had the pleasure of inducting Cosby, who excelled on the baseball diamond while at Chowan.

“Wayne was the type of person that did what he was told to do,” Hawkins said. “He was a third baseman and he pitched some as well on a team that lost only two games, including 2-1 to a team that went on to win the National Junior College championship.”

While Hawkins admitted that Cosby was a standout player, it was what his former player accomplished later in life that set him apart from others.

Cosby created one of the most dominant high school football teams in the state of Virginia. In 14 seasons (1966-1980) as the head coach at Southampton High School he amassed an amazing 128-8-2 career record, including a then national record 69-game win streak. From 1972-1979 his teams played in eight straight Virginia High School State Championship games and won four VHSL Group AA titles. He has been tabbed Coach of the Year by several coaching associations and was runner-up for National Coach of the Year in 1979.

“Those numbers say a lot about the man, the coach, that Wayne Cosby became,” Hawkins said. “Not only did his players excel on the football field, many went on to become teachers, doctors, attorneys, coaches, county administrators, ministers and business professionals.”

Hawkins also noted Cosby’s “second life” after retiring from the coaching ranks. In 1981 Cosby successfully ran for the Clerk of Circuit Court for Southampton County and the City of Franklin, holding that position until he retired in 2007.

“This is an honor, a privilege, and a very humbling experience for me to stand here and receive this recognition,” Cosby said after accepting his Hall of Fame plaque. “I express my deepest appreciation to all those who have made this day so special to (wife) Judi and I.”

Cosby recalled his first visit to Chowan from his hometown in Richmond, VA. He said he liked what he saw, but didn’t care too much for the distance from the love of his life (Judy).

“I couldn’t visualize her being in Richmond and me being in Murfreesboro,” he said. “But she encouraged me to go to school. The week before I came to Chowan, Judy and I got married. Life for us started right here on this campus some 52 years ago. Life was tough back then, and there have been some other bumps along the way, but she has been with me, beside me and supported me for all these many years.”

Cosby said his wife worked at Howell Metal Company in Murfreesboro to help pay the bills, including the price of his Chowan education.

“She earned her degree while I was still in school….she earned a PHT, Push Hubby Through,” he chuckled. “I was smart not to leave that girl in Richmond. I loved her then and I love her even more today.”

Cosby recalled the lessons learned at Chowan, not just those confined to athletics. He said the professors made the material real, presenting it in a way that he could wrap his mind around.

“So many people, past and present, have made this university what it is today and I’m proud to call myself a Chowan graduate,” Cosby concluded.

Adam Daughtridge performed the honor of inducting his father into the Chowan Sports Hall of Fame.

“People always talk about character and how you’re born with it, well I’m here tonight to tell you my father, Wayne Daughtridge, is a man of character,” Adam said. “He is very humble, he will not brag about his accomplishments on the football field…. I didn’t even know he played high school football, let alone college football, until I was nine years old. The only way I found out then was that I found his old football jersey one day.”

The son did brag on his father, saying he was an iron man, playing a full 60 minutes on offense, defense and special teams.

“He never fussed, he never complained, he just did his job,” Adam said. “I think that came from his parents, my grandparents, who raised him with humility, honesty and to have good character.”

Wayne Daughtridge came to Chowan in the fall of 1964, playing for two seasons as a fullback and linebacker under the legendary Hall of Fame coach Jim Garrison. He was named the team’s Most Valuable Player following the 1965 season.

“I consider it a real honor to be chosen for the Chowan Hall of Fame,” Wayne Daughtridge said in his remarks. “I’m very humbled by this.”

“I thought he was going to kill us all,” he said. “But he was proving a point that later helped us because in the fourth quarter of our games we were always the fresher team due to those conditioning drills. We had two good football teams while I was here.”

After working in the home construction business, including owning his own company, Daughtridge retired in 2008, but still dabbles in small home repairs and remodeling.

Hall of Fame rings were presented to Cosby (courtesy of Mr. and Mrs. Jim McGill), Daughtridge (Taylor’s Insurance), Reynolds (Mr. and Mrs. Dennis Helsel and John Tayloe), Fitzgerald (Mr. and Mrs. Clif Collins), and Waller (given in memory of Warren G. Sexton Sr. by his family).

Sexton, Chowan’s retired Chairman of the Department of Social Sciences, was inducted into the Hall of Fame in 1995. A charter member of the Braves Club (now Hawks Haven) which he helped to start, he served on the Hall of Fame until his death on Aug. 10.