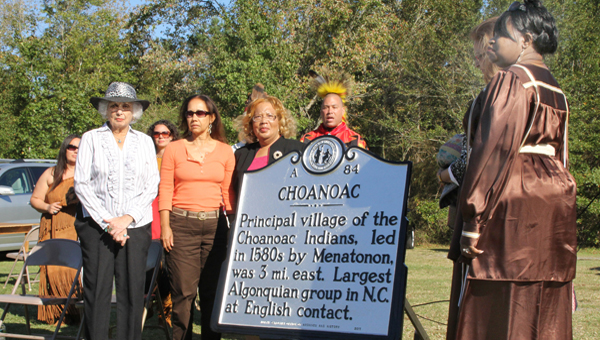 HARRELLSVILLE – It’s only a brief description of the broad history of Hertford County, North Carolina and the United States, but yet a small marker dedicated here Friday afternoon bears a much larger message.

A historical marker will stand at the intersection of NC 45 and Swain’s Mill Road near Harrellsville, approximately three miles from where the Chowanoke (also spelled Choanoac) Indians first came face-to-face with English colonists 425 years ago.

At that time, the Chowanokes, perhaps numbering as high as 2,100, were the most numerous and most powerful of the Algonquian tribes in North Carolina.

Marvin Jones, a Cofield native, of the Chowan Discovery Group led the effort to have the marker erected in honor of the Chowanokes.

“This marker is long overdue because it represents the oldest part of American history,” Jones said in his opening remarks of a 30-minute ceremony held on the grounds of the historic Mt. Pleasant Missionary Baptist Church.

Jones, an avid historian, said the mission of the Chowan Discovery Group is to research, document, preserve and present the history of the Winton Triangle, the tri-racial landowning people of color that live in the Cofield, Winton and Ahoskie area.

“When you begin to discuss Winton Triangle history, the Chowanokes are the core group to talk about,” he noted. “Archaeological evidence, by digging into the Chowan Acres, Mount Pleasant community, shows human existence here as early as 700 AD and the Chowanoke descendants here today may be directly linked to those people from 700 AD.”

Jones said the next timeline in Chowanoke history came in 1584 when the first English expedition, sent by Sir Walter Raleigh’s brother-in-law, Sir Humphrey Gilbert and preceding the fame Lost Colony, was sent to Roanoke Island. There, Gilbert interviewed the great Indian chiefs of that time, Manteo and Wanchese, and heard about the Chowanoke people and the great river known today as the Chowan.

“A year or two later they came back to Roanoke Island and explored the Chowan and met the Chowanoke people, thus the beginning of the written and recorded history of the Roanoke-Chowan region in 1586.”

Jones explained that the diseases brought by the English colonists decimated the coastal Indian tribes. He said the Chowanoke were among those not immune to those strange new diseases, forcing the tribe to abandon its main settlement and cross the river to Bennett’s Creek in Gates County.

“They were reduced to a single group of people, instead of having 19 villages on the Chowan River, they had just one settlement in Gates County,” Jones said.

By 1750, the Chowanokes were reduced to two families – Bennett and Robbins. The majority of those he said left the local area for Virginia, Indiana and Ohio, while others joined with other local tribes.

“It’s here where you find the tri-racial roots, Indian, White and African-American,” Jones explained. “All the books, all the research shows that around 1820 the Chowanokes no longer existed. But the families still existed, the memories still existed.”

Jones said by 1850, only the family of Noah Robbins was still on the books. That family moved to Colerain and participated as part of the United States Colored Troops during the Civil War. After the war, he said, the family relocated to Hertford County.

“You might could say that a Chowanoke rebirth took place with this one family,” Jones noted. “That was the Andrew Jackson Robbins family, many of those descendants are here today, I’m one. We hung on to survival to a point where thriving could occur and that’s where America needs to be right now.”

Jones singled out one Bennett descendant in attendance at Friday’s dedication – Shoshone Elmardi. She, along with Robbins descendants, took part in unveiling the historical marker.

“Today is the first time that the Bennetts and the Robbins have been together in 200 years,” he said.

“When you listen to Marvin speak or read his writings about his deep understanding of the Native American history of our area, it’s like he knew them personally. He has a passion for telling that history and promoting it for today’s generation and those that follow to see. I’m very appreciative of his efforts to preserve and promote the rich history of our local area,” stated District 5 NC House Representative Annie Mobley.

Russ Haddad, Congressman G.K. Butterfield’s Director of Economic Development and Business Outreach, said he was pleased that the history of the Chowanoke people is being preserved and placed on display.

“This is a nugget of history, not only for Hertford County and North Carolina, but one of national significance,” Haddad stated. “The historical marker program is significant as it helps drives heritage tourism in our state. It helps tell the many stories of our state’s history. The story of the Chowanokes can start to be told through this marker.”

District 4 State Senator Ed Jones also mentioned the importance of preserving the past.

“You have to tell the story of your ancestors, as this marker does today,” he said. “One proud part of Native American culture is they love to tell their history. So many of us forget where we came from. Native Americans don’t forget. They were among the first people here, they have never let us forget that and we should never forget them.”

Linda Eure of the North Carolina Office of Archives and History, who serves as Site Manager of Historic Edenton, also made remarks. She noted there are 1,550 historic markers have been erected statewide over the past 76 years, of which 17 are in Hertford County.

“This marker is important in our state’s history as it tells the story of the Chowanokes meeting the Roanoke colonists in 1586,” she stated. “This marker will play a part in ensuring the connection of the Chowanoke with this town, county and state and it will be remembered for many generations to come.”

Also taking part in the dedication were Reid Daniels of the Harrellsville Historical Association, the Rev. Mark Hall of Harrellsville Baptist Church and a group of drummers and dancers representing the Meherrin Indian Tribe.

WINDSOR – Less than one month on the job, Bertie High School Principal Carson Watford has been suspended. The Roanoke-Chowan... read more