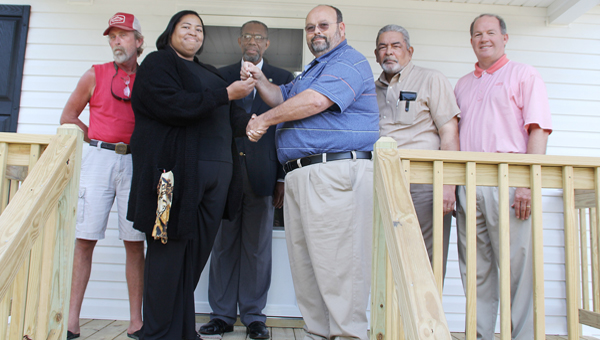 GATES – Persistence paid off in the case of one Gates County citizen in dire need of a new roof over her head.

On Oct. 6, Anjanette Moody took possession of her new home located on Gates School Road, a five-room residence that came razor close to never being built.

Prior to her father’s (Jarvis Moody) death in October of 2008, the family was living in substandard housing. There was no indoor plumbing. The roof and interior ceiling were severely damaged due to a storm.

“The condition of this home first came to the attention of the (Gates County) Housing Committee while Mr. Moody was living,” said Colleen Turner, Director of the Gates County Department of Social Services. “But he was a simple man, a proud man, and didn’t want any type of major help, but his wife and daughter needed help and they came to us after Mr. Moody passed away.”

From that point, the mother/daughter were on the list for possible assistance from Community Development Block Grant (CDBG) Scattered Site funds received by the county for renovation or replacement of substandard housing.

While the living conditions of the mother and daughter fit the CDBG criteria, plans to replace the home took a major setback on June 3, 2010 with the death of the mother, Martha Moody. She had just been approved for the CDBG housing replacement funds.

“The obvious choice at that time was to take her off the list,” said Turner. “Had it not been for (former Gates County Commissioner) Mr. (Carlton) Nickens, this would have not happened. He pushed and pushed and pushed to get this project through the system. The need was still here even though Mrs. Moody had passed away.”

“Senator (Ed) Jones had a big hand in this,” Nickens said. “I called his office and the ball started rolling. I also had the support of my fellow commissioners at that time.”

It was that type of effort which led current Gates County Commissioner and Board Chairman Graham Twine to formally present the keys to Anjanette Moody for her new home. The residence contains approximately 750 square feet of living space, to include two bedrooms, one bath, a living/dining room combo and a kitchen. The home, built for $58,000 by Godfrey Brothers Construction of Elizabeth City, also includes a refrigerator, stove, washer/dryer and a septic system.

“Welcome Miss Anjanette to your new home,” Twine said. “Working in county government is often a battle, but when something like this happens in Gates County, when one of our citizens receives help through the state and local government, this is the part of the job I love the most. We’re glad this happened to Anjanette.”

“I couldn’t think of a happier time than this morning,” said Nickens as he stood on the front lawn of the new home. “I was involved in this project from the very beginning. This is something you (Anjanette) deserve. My only regret is that your mother is not here. But remember that your mother has a new home too and she is smiling down on us right now.”

“I want to thank all of you for making this happen,” Moody said. “All of you worked so hard to help me. God bless you all.”