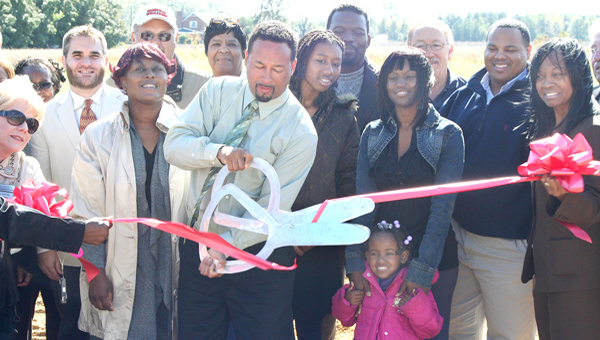 Howard Hunter III cuts the ribbon that ceremoniously opened construction phase of the Howard Hunter Jr. Villas, named in honor of his late father. Also shown are members of the first family to build in the Villas - Joyce Anderson (left of Hunter) and, right of Hunter, JaQuitta Stephenson, LaQuitta Futrell and granddaughter La’Kirah Beale. Staff Photo by Amanda VanDerBroek

MURFREESBORO — For 12 long years Joyce Anderson has waited for this moment.

Last Thursday, Anderson along with her family, local and state dignitaries and area agencies, broke ground on the Howard Hunter Villas.

Anderson and family, including daughters LaQuitta Futrell and JaQuitta Stephenson and her four-year-old granddaughter La’Kirah Beale, will be the first family to call the subdivision home.

Their 1,456 square foot, four bedroom home will be the first built on the site and construction on another home will start soon.

Howard Hunter Villas, named after the late NC Rep. Howard Hunter Jr., was spearheaded by Hertford County QUOLA and is a housing development for low to moderate income families.

“This is our first family in this subdivision which is a historic moment for all of us,” said Joyce Peoples, QUOLA executive director. “We’re so glad it’s finally happened.”

Over the years the project has periodically stalled thanks to snags and red tape, but Anderson kept the faith.

“God, he’s in the blessing business, dreams will sure come true,” Anderson said.

In 1999, Anderson, a Murfreesboro native, was living in a mobile home not far from the Villas site when her niece encouraged her to go to Hertford County QUOLA for housing assistance.

“Ms. Peoples told us what we had to do, get our bills paid up and get our credit right and we did,” she said.

After years of waiting for the project to progress, Anderson had to move out of her mobile home. She moved in with Futrell in Greenville, where her daughter is attending school to become a nurse. Despite the passing years, the family never gave up hope that their home would become reality.

“It has been a long time, but when things came up we just kept going,” said Futrell.  “Never give up, as long as you keep focused on the bigger plan it will come true.”

Now, Anderson is looking forward to making meals and baking in her new large kitchen.

“I love to cook and the kitchen area is nice and big,” she said. “I’m so happy I can’t even explain it.”

The Anderson family was joined by several officials with the agencies and governments that helped make their dream come true, including QUOLA, the North Carolina Community Development Initiative, the Choanoke Area Development Association (CADA), the town of Murfreesboro, Hertford County Commission and Sen. Ed Jones. The United States Department of Rural Development also assisted in providing low-interest loans for the families.

Hertford County Commissioner Howard Hunter III, son of Rep. Hunter, thanked all those involved for “all the hard work” along with contractor Vernon Kee for the work they will be doing at the site.

“My daddy would be extremely proud,” Hunter said.

He also congratulated the Anderson family

“I guess we can call you the first family,” he quipped.

Sen. Jones also expressed his best wishes for the family.

“I’m so happy for you to have a place to stay and have something that’s new in your life and I hope it serves you well,” he said. “You can set examples for others so that they will hope to get in the same type of housing.”

Murfreesboro Mayor John Hinton said the town was proud to have the development in their community and wished the family the best.

“This is a fine day for Murfreesboro, this has been a long time coming and commissioner, it is a fitting tribute to your (Hunter’s) father who gave so much of himself to this county,” Hinton said.

Lynn Johnson, first vice president of CADA’s Board of Directors, said as the representative of the organization and the former Murfreesboro mayor she was glad to see the project come together.

“I’m very glad and as a personal friend of your (Hunter’s) father I’m very glad this is a living tribute to him,” she said.

Kee said the homes constructed will be “high performing” houses.

“They’ll be cheaper to heat and cool than any other houses you have around here that’s not built to these specifications,” he said.

He added Mooring Building Supply donated the shovels for the groundbreaking.