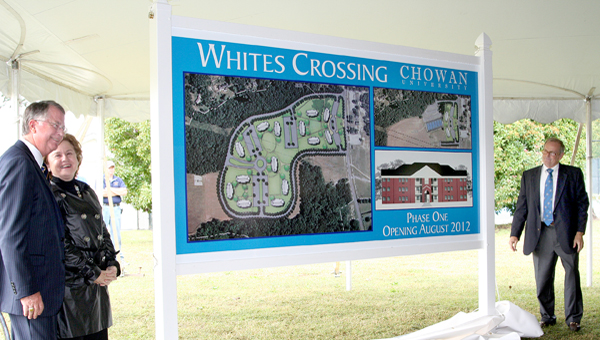 Pictured from left, Chowan University President Dr. Christopher White and his wife, Linda, are joined by Board of Trustees Chair Frank Rose during the unveiling of the Whites Crossing design plan during Wednesday’s groundbreaking ceremony. The project is a student residential complex named in honor of the White family.

MURFREESBORO — It is the start of the beginning.

On Wednesday, hundreds of visitors, alumni, faculty, staff and students gathered at Chowan University to watch a little bit of Hawk history unfold.

The university held its first groundbreaking in nearly 30 years, this time for Whites Crossing, a student residential complex named in honor of Dr. Christopher White, the current university president, and his family.

Phase I of the project will include the construction of two suite style buildings, capable of accommodating 136 upperclassmen. The $4.7 million investment will be located near the tennis courts along Chowan College Road. Completion is expected in August 2012.

The whole of the site selected for the project can contain at least 14 buildings and university officials said they hope to build more soon.

“Chowan University’s remarkable growth in the past few years has been a reason for this project,” said Frank Rose, chair of Chowan’s Board of Trustees. “We have been accustomed to announcing new enrollment records each fall and this fall is no exception.”

The Board of Trustees voted unanimously to name the complex after the Whites in recognition of not only Dr. White’s work as the leader of Chowan since 2003, but his family’s contribution as well.

Trustee Bynum Brown spoke about the history of Chowan and Dr. White’s accomplishments in his eight years in the leadership position, including getting the institution’s finances in order and helping in the transition from a college to a university.

“At the end of the first year we were in the black for the first time in a long while,” he said.

Prior to the unveiling of the design plans and the name of the housing complex, White, along with other featured speakers, spoke about the momentous event.

“This occasion is historic for several reasons. First, it’s a tangible demonstration of Chowan University’s near miraculous resurgence as a respected university with strong academics and solid finances,” White said. “Second, it’s a statement of faith in this university by the trustees, faith not just in this university, but in the state and this region. And third, this will be Chowan’s first new housing development in over 40 years and the first groundbreaking of any kind on this campus since 1984. This is big.”

Hope Williams, president of North Carolina Independent Colleges and Universities, offered her congratulatory remarks and likened the groundbreaking to a rekindling for Chowan.

“This is a big part of the renaissance of Chowan University, it truly is a rebirth,” she said. “When you think about what has happened in the last eight years, since Chris and Linda White have been here, the work that the board of trustees, all the administrators, everybody, faculty and staff, citizens of Murfreesboro and the entire county, have done to make this a success—it is truly worth celebrating.”

North Carolina Senator Ed Jones, who serves on Chowan’s Board of Trustees, noted how the university’s leaders have vision for the future.

“Every Hawk should have a good nest and we’re going to build some nests for you here at Chowan,” he said. “Always remember this day that you were here when something great happened at Chowan University.”

North Carolina Rep. Annie Mobley spoke about the economic influence the building project will have.

“Construction means growth,” she said. “We know that what is about to take place here in Murfreesboro is going to provide some jobs, some meaningful jobs. When we think about the purpose of what the jobs are going to bring, the results being housing for our young people.”

Johnnie Farmer, chairman of the Hertford County Board of Commissioners, said he believed Chowan University has had a profound effect on the country. Farmer said he witnessed this during his military career when people would ask him where he was from.

“I would have to say close to Greenville, close to Elizabeth City—I’d keep on naming towns until I named one they might know of,” he said. “Every now and then when I would say Ahoskie the person would reply, ‘I know where Ahoskie is, it’s close to Murfreesboro.’ And then they would proceed to tell me that they were a graduate of Chowan College.”

He said Hawks are known all around the world and were well represented by the university’s alumni and that Chowan has a profound effect as an institution on many people.

Murfreesboro Mayor John Hinton sent felicitations from the town to the university so deeply rooted in Murfreesboro.

“Speaking for the citizens of Murfreesboro, we are proud to have Chowan University as a pillar of our historic community,” he said. “This university leads the way in making our town a shining light in Northeast North Carolina, a beacon, on the banks of the Meherrin for history, culture and scholarly thought.”

Betty Jo Shepheard, a spokesperson of US Senator Richard Burr, read a letter from the representative.

“As you break ground today for your new student residence complex, this is a time for faculty and staff students and all of those associated with the university to reflect on this accomplishment and also to look forward to the future,” she read.

“Today marks the beginning of a new era for your institution,” she read. “Your vision to provide the best accommodations for your students, especially during these economic times, is noteworthy and commendable.”