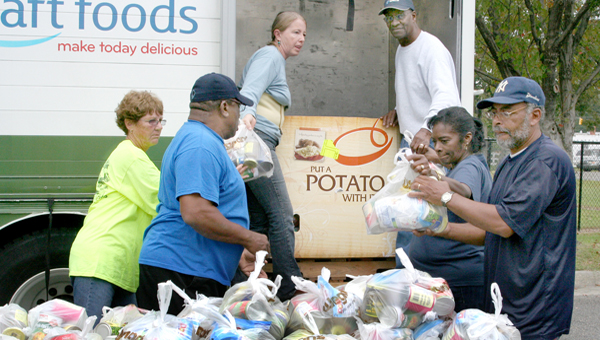 Numerous volunteers gathered last week in the parking lot of Murfreesboro Baptist Church to help distribute food delivered by the Food Bank of the Albemarle. Mobile food pantry distribution was the first of its kind in Hertford County. Staff Photo by Amanda VanDerBroek

MURFREESBORO — Success would be one way to describe the very first Food Bank of the Albemarle mobile food pantry event in Hertford County.

On Tuesday, dozens of volunteers from local churches and organizations gathered in the parking lot of Murfreesboro Baptist Church to distribute food to families in need. During its first run the distribution was able to serve 125 area families.

The effort was made possible through a partnership between a coalition of six churches and the Food Bank of the Albemarle.

Numerous cars lined up along Broad Street behind the church before the distribution began at 3 p.m., passengers waiting for their turn to receive food items.

“Jesus tells us to feed hungry people and because we’re Christians that’s what we do,” said the Rev. Lee Canipe, pastor of Murfreesboro Baptist Church. “We’re helping in Jesus’ name.”

The food bank recently received a grant from the Community Health Benefits program offered through Roanoke Chowan Hospital. Part of that grant went to the start up process of placing a mobile food distribution unit in Hertford County.

It all began months ago with a chance meeting at the Diabetes Fair held by the Murfreesboro Recreation Department, yet another effort possible through the same grant program.

Canipe, who was attending the fair with his wife, Dr. Hilary Canipe, met up Sandra Woodard, RCH Director of Development, who introduced him to a staff member with the Food Bank. From there the idea spiraled and, in the end Canipe’s church, along with Murfreesboro First Baptist, Meherrin Baptist Church, Murfreesboro United Methodist Church, Buckhorn Baptist Church and Parker’s Grove Baptist Church formed a coalition to help distribute the food.

“The grant is enough to fund us one year,” Canipe said. “It’s roughly $400 for each trip the truck makes.”

The second Tuesday of each month at 3 p.m. the Food Bank’s food truck will make a stop in Murfreesboro to provide those in need with food items, including meat, bread, water and canned food.

Canipe said what the Food Bank provides is enough to feed a family of four for three days.

“It’s not a lot, but it’s three days they don’t have to worry about,” he said.

Organizers of the Murfreesboro event visited Jackson before Hertford County’s first run to map out an efficient way to distribute the food. As the cars parked to be loaded, the volunteers, using shopping carts provided by Lowe’s Foods of Murfreesboro, filled trunks and backseats with food.

“It’s a mission statement for Hertford County,” said Walter Elliot, associate pastor at Murfreesboro First Baptist where Rev. Robert Richardson is pastor. “People have been generous about volunteering for this, but we still need them to volunteer.”

Richardson was one of several who attended to help with the effort. Many volunteers were affiliated with the local churches. A small group also came from QUOLA.

Brian Miller, director of operations for the Food Bank of the Albemarle was impressed with both the number of volunteers as well as the recipient turnout.

“This is the first time we’ve been here with the mobile food pantry and we’re excited to be here,” he said. “Our goal today was to get out all of the food and help as many as possible”

He added the mobile food distribution had the possibility to grow and those who want to join the effort or make a contribution to the food bank should call (252)-335-4035.

For volunteer information about the mobile food bank in Murfreesboro call Peggy Lowe at 398-4288.

A wide assortment of vendors are on hand each Saturday at the Farmer’s Market in Windsor. There, the efforts of... read more