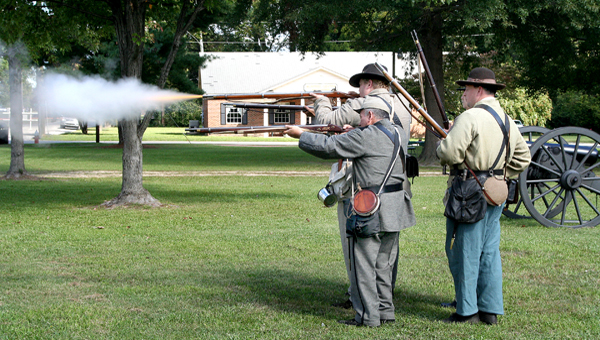 MURFREESBORO — This past weekend Rebels and the Yankees descended on Murfreesboro with their cannons, rifles and horses.

“It’s what we’ve hoped for,” said Carol Lassiter, a member of the Murfreesboro Historical Association’s Civil War Committee. “The weather has been beautiful and the attendance has been very good.”

The Murfreesboro Historical Association kicked off its Civil War “Living History” events back in April, in conjunction with commemoration of the war’s 150th anniversary.

The reenactment activities were the second event held by the organization. The first was the opening of a Civil War exhibit at the Rea Museum. Murfreesboro’s sesquicentennial commemoration of the War will be ongoing through 2015.

“We do plan on having another reenactment, probably the second Saturday of October 2012,” Lassiter said.

She added at the next event she hopes more Civil War re-enactors will participate.

The weekend activities included artillery and infantry drills on the lawn of Hertford Academy where numerous encampments were set up. The Hertford Academy also hosted several local authors and historians with books for sale. Saturday’s events concluded with a skirmish at the Melrose House on Broad Street.

The historic district invited visitors to tour the various museums, including the Rea Museum, the Winborne General Store as well as the Wheeler House and Slave Quarters.

The Civil War reenactments brought out the curious and those with their own connection to the conflict that pitted “brother against brother.”

Patricia and Tim Perry of Pendleton brought their six-year-old grandson, CJ Hatcher, to expose him to a little bit of history.

“My husband is a history buff, and we thought it would be a good experience for CJ,” Mrs. Perry said.

Perry said his great-grandfather, who was from Bertie County, fought in the Civil War.

“I like the Southern history,” he said about his Civil War’s allure.

Perry said he hoped his grandson would learn about the conflict at the event.

“I’m sure he’s going to be learning something other than having fun,” he said.

Travis White of Conway and his eight-year-old daughter, Kayla, decided to attend the event for a history lesson as well.

Kayla said she was enjoying seeing the reenactments as well as the history aspect.

“I think it’s really cool to find out stuff about the past,” she said.

White said he was happy to have a reenactment event so close to Conway and the event in general keeps the Civil War alive in the minds of the current generations.

“It’s nice to have it so close to home where she can learn about it, seeing it is better than reading about it,” he said.