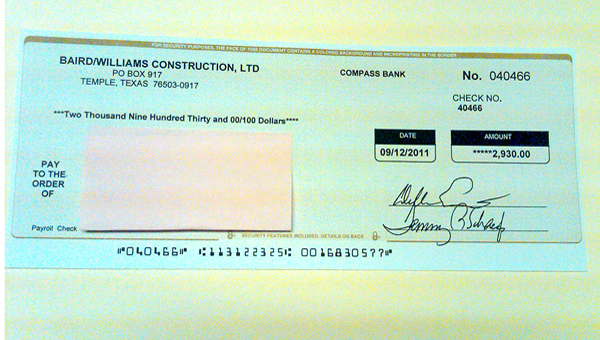 Northampton County law enforcement officials are urging local citizens to be alert for fraudulent checks, such as the one shown above, that have been reported over recent weeks. Contributed Photo

JACKSON — The Northampton County Sheriff’s Office is asking citizens to be on the lookout for fraudulent check scams.

According to Northampton County Sheriff’s Detective Lt. Brenda Burnette, a citizen recently brought in a fake check they received through the mail and reported it to the NCSO.

A recent wave of check scamming reports have come into the NCSO, mostly involving scammers that request the victim to send a particular amount of money in order to receive a larger sum.

“People are not going to give money to you like that,” Burnette said.

The person who reported the check did not respond to the scam. However, there was another victim that was not so lucky.

“There was one young man who sent $550 to India,” Burnette said.

She added the scammers are targeting those of all ages, from the elderly to younger adults.

Burnette said residents should be weary of any person on the telephone or corresponding by letter asking for personal information.

She added they should also beware of letters and/or checks received through the mail from persons unknown.

“I want the citizens of Northampton County as well as other counties to be aware (of scammers),” she said.

Harry Thompson and his wife, Barbara, stand next to his prototype three-wheeled vehicle, one capable of traveling 95 miles per... read more