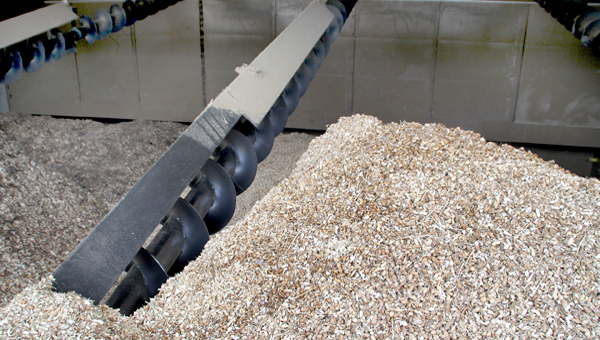 COFIELD – Despite its small geographical size, Hertford County continues to maneuver among the land of the giants in becoming the home to renewable energy businesses.

Last week, Perdue AgriBusiness, a company with a Hertford County address for 40 years, opened its first biomass facility at its soy feed mill in Cofield. Partnering with Wellons Energy, based in Vancouver, Washington, Perdue Agribusiness has added twin 600-horsepower biomass boilers at its Cofield complex.  The innovative partnership has resulted in a renewable energy supply to help power a soy crushing facility and feed mill, thus eliminating the need for fossil fuel.

The Cofield boilers are fueled by wood waste products, including whole tree chips, as well as peanut hulls, cotton lint and the sticks and pods that are removed during soybean processing. The latter is an environmentally friendly and cost-saving measure for Perdue as it previously sent those byproducts to the landfill, where tipping fees were paid.

“We are very pleased with the start-up of our very first biomass-fueled combined heat and power operation. This impressive facility will provide the entire steam needs for this complex,” said Perdue AgriBusiness President Dick Willey.

“In each case we plan to reduce our costs and/or improve our energy cost risk management while growing our renewable energy portfolio,” he said.

Those projects, he said, range from biomass boilers, another one to open later this year at Perdue’s processing plant in Lewiston, to solar energy parks and capped lagoons that capture methane gas.

Willey thanked Wellons officials for their technical know-how. He also praised the State of North Carolina as well as officials in Hertford County and Cofield for creating a supportive environment.

“I want to thank the entire Cofield team for embracing this concept and helping to make it a reality,” Willey said.

Garald Cottrell, president and general manager of Wellons Energy, emphasized that an entrepreneurial approach is a cornerstone of his company’s business plan.

Cottrell also mentioned the new biomass facility his company will operate in partnership with Perdue at the Lewiston plant. He said that facility will generate steam power from three boilers, one more than the Cofield plant.

“We proudly back what we do,” Cottrell said. “We have designed a product that does more than we say it can do. People may talk a big game, but in the case of Wellons Energy, we exceed all expectations.”

“We welcome Wellons to the Perdue family and the Hertford County family,” said Johnnie Ray Farmer, chairman of the Hertford County Board of Commissioners.  “We’re very proud to have such a facility in our county. This will add to a great relationship we already have with Perdue. They have been a great community partner by offering employment opportunities to our citizens. Those Perdue employees participate in organizations in our county and thus make this a better place to live. In the same accord we hope that the Wellons family will find Hertford County a good place to do business and live.”

“This facility here in Cofield serves as a great example of what we are capable of doing in this state,” he noted. “It’s a tremendous example of how to use biomass resources in a sustainable manner. We’re excited to see this project come together here in Hertford County.”

The boilers at Cofield are owned and operated by Wellons. Perdue Agribusiness will purchase steam heat from Wellons for the next six years. Officials from both companies said the partnership is also beneficial locally as renewable wood waste products are needed to fuel the boilers. Local trucking companies can also benefit by hauling that wood waste to Cofield.

Air emissions at the plant are controlled through the use of multi-cyclone cyclonic separators, which utilize centrifugal, gravitational, and inertial forces to remove fine particles suspended in air or gas similar to a Dyson vacuum cleaner.

The plant has a capacity of 41,400 pounds of steam per hour and the design allows for the installation of a third boiler in the future, if needed. Perdue estimates 18,000 tons of carbon credits per year will be generated compared to using fossil fuel.

The steam that is produced by the plant first goes through a turbine, producing 375 KW of electricity that Wellons sells back to the grid. Perdue AgriBusiness will purchase a minimum amount of steam per year from Wellons at a set price for use in its operations, controlling costs while decreasing the company’s dependency on fossil fuels.

“It’s a cliché but it’s also true that this is a win-win, and a truly sustainable business decision,” Willey said.