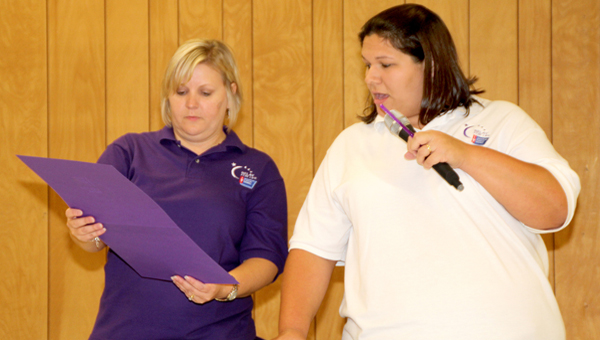 MURFREESBORO – One more year down, unfortunately another one awaits.

While organizers and participants of the Hertford-Gates Relay for Life wish they fold up the tents forever, the fight against cancer will continue another year.

Last week, local Relay for Life officials conducted their annual year-end wrap-up as well as kicking off the 2012 season.

Rochelle Harrell and Leigh Nowell, co-chairs for the 2011 Relay for Life Planning Committee and who will serve again in that role for 2012, presided over the Sept. 22 event held at Metal Tech in Murfreesboro.

The biggest news shared that evening was the money raised at the 2011 Hertford-Gates event. Those funds assist the American Cancer Society in medical research and cancer awareness education.

“Our overall goal was $256,300,” Harrell said. “At the end of this year’s Relay back in April we had raised just over $207,000. You guys really worked hard since that time and raised money to get us close to that goal.”

She continued, “The real good news is that because of all your work in making sure that we did not spend as much money as was budgeted for our Relay, our net goal, minus expenses, was $252,500. We are at $255,668.38. We didn’t meet the gross goal, but we did meet and exceed our goal for the bottom line. Thank you to all of you, your contacts and your team members for that.”

Harrell also revealed the other goals sought during 2011. She said there was a goal of 47 in the number of teams.

“We didn’t quite meet that goal, but it doesn’t matter as I thought we had the coolest people ever out there this year,” Harrell said. “As we look forward to 2012, let’s go out and get those teams. If you know of someone interested in starting a team, but not quite sure how they need to go about that, let us know and we’ll be happy to guide them through the process.”

“We were extremely pleased with the number of young people participating in our Kid’s Walk,” said Harrell, adding that 115 took part, far exceeding the goal of 72.

“Those children are the future of our event,” Harrell added.  “As long as we keep them motivated, keep them involved, our future is bright. I’m really hopeful we won’t need them once they become adults because that will mean we’ve helped find a cure for cancer. If not, then when they’re adults and we’ve groomed them and done our part we’ll know that our Relay will keep growing.”

Each team participating in the 2011 Hertford-Gates Relay for Life was recognized at last week’s event, as were the numerous corporate sponsors.

Harrell and Nowell also signaled out the “best of the best” at the 2011 event as the following teams were recognized for the money they raised:

Relay event awards were earned by the following:

Light up the Night

Jackie Brinkley was recognized as the top individual fundraiser. Nucor Steel and Cheryl’s Girls respectively earned the number one and two spots as the top fundraising teams.

Last week’s gathering also served as the official kick-off for the 2012 Hertford-Gates Relay for Life. That annual Relay is scheduled for April 27-28 at Squirrel Park on the campus of Chowan University. The goal to meet is $267,100.

“It’s not all about just raising money,” Harrell noted. “We have developed life long friendships with those involved in Relay for Life. We have drawn closer to those with cancer and their caregivers. When one of us hurts we all hurt. When one of us rejoices, we all rejoice. Keep that in mind as we strive to reach our goal with a great group of people.”