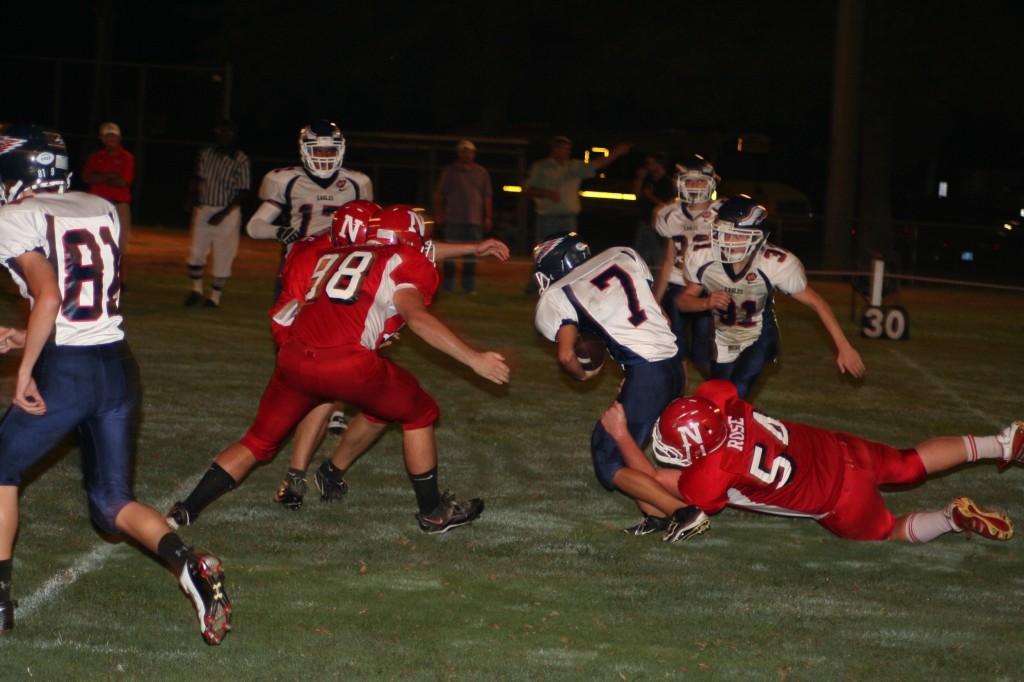 LASKER – It was business as usual for the Northeast football Eagles Thursday.

The Eagles feasted on a steady diet of Bo Daniel running the ball early and often, sometimes dragging Rocky Mount defenders with him. Daniel got help from Adam Creech as he burned the RMA squad on several plays.

In the end, Northeast put up 54 points as they rolled past Rocky Mount 54-12 in a North Carolina Independent School Athletic Association eight-man football game.

While the offense did its part, the defense made huge strides as they claimed huge stops and Michael Cooper continued his pass interception feast that he started Monday at Lawrence and Ryan Williams got into the business with an interception in the endzone.

Northeast wasted no time getting on the board as they scored on their opening possession. The home team went 52 yards on six plays with Daniel picking up the key play on a 22-yard gain.

Brad Johnson capped the drive with a six-yard run and Daniel added the two-point conversion to give Northeast an 8-0 lead with 8:06 to play in the first quarter.

Rocky Mount responded with a drive that went all the way to the Northeast two-yard line before the home teams topped the drive. After taking over possession, Johnson picked up five yards on a quarterback keeper. On the next play, Benton Barrett went 93 yards to paydirt. Daniel added the conversion and Northeast upped its lead to 16-0 with 2:46 still to play in the first quarter.

Northeast forced a Rocky Mount punt on the next possession and Cooper made them pay as he took the ball at midfield and returned it for a touchdown. The conversion run failed, but Northeast led 22-0 with 11:37 to play in the first half.

Northeast ran the score to 28-0 when, after stopping RMA on downs, they put together a 31-yard, three-play drive. Johnson connected with Joseph Brown on the scoring strike and the conversion run failed, leaving the Eagles ahead by 28.

The first possession of the second half saw the Eagles add to their advantage. This time it was Creech who had the score, going 45 yards on the first play from scrimmage in the third quarter. The conversion failed and Northeast led 40-0 with 11:35 still to play.

Northeast added another score just moments later when Williams scampered 25 yards to paydirt. The extra point play proved to be one of the more unusual plays of the contest as Barrett split the uprights on an extra point – one of the first made – or even attempted – at Northeast in nearly a decade. The result was a 47-0 lead for the home squad.

The final score for the Eagles came on their next possession when Williams connected with Clay Robbins on a 51-yard touchdown pass. Barrett again kicked the extra point and the Eagles led 54-0.

Rocky Mount got on the board on the next possession when Kasey Royster went 61 yards for a score. The conversion run failed and Northeast led 54-6.

The visiting squad scored again with 2:03 to play in the game when Christopher Jenkins went in from two yards out. The conversion run failed and Northeast maintained a 54-12 lead.

RMA recovered on on-sides kick and then fumbled the ball away late in the contest.

Northeast simply took a knee to end the contest.

As they head into next week’s contest at Parrott Academy, Northeast stands 3-3 for the season under first-year skipper Stevie Flythe.

Out Here in Left Field

I’ve been around Bertie High School now for more than 25 years. I enrolled in the school as a freshman... read more