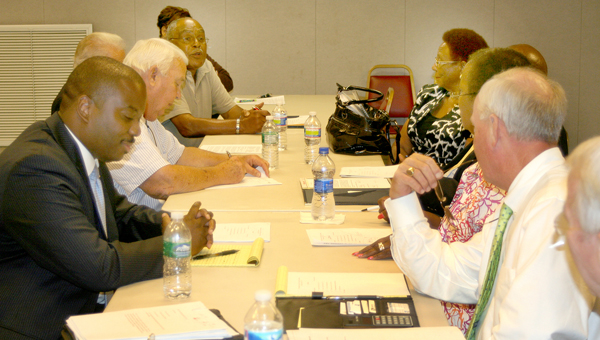 Members of the Northampton County Board of Commissioners and the County Manager (right side of the table) met with the School Superintendent and Board of Education (left) last week in Jackson. Staff Photo by Amanda VanDerBroek

JACKSON — It was a meeting filled with questions and answers.

Last week, the Northampton County Board of Commissioners and Board of Education met in their first joint meeting since mediation took place between the two governing entities in July.

Among the items of discussion were the school district’s budget needs for next year and there were also some answers regarding supplements and bonuses for school employees.

“At this point we don’t know all we need to have for the 12-13 (fiscal) year, but I am going to put something on your radar,” said Dr. Eric Bracy, superintendent of Northampton County Schools.

For the past year and the current year, Bracy said the district received funding from federal stimulus money in the amount of $467,000 that funded six teacher positions. He added $205,000 had been spent last year.

In addition, Bracy said the school system this year received a $472,000 discretionary cut from the state budget. Another $682,000 was also taken back by the state.

“Everything that Joe (Holloway, NCS finance director) and I are hearing is that the discretionary cut very well could be at the $750,000 range for the next school year (12-13),” he said.

Northampton County Manager Wayne Jenkins said those cuts mean NCS could be operating with more than $1 million less next year.

Jenkins in turn updated school officials on the decreases the county was projected to see next year.

“All indicators we’re getting at the county level is that we can expect next year to be worse than this year—sales tax down (and property taxes),” he said. “So that million dollars to meet your needs, we’re going to be lucky if we can sustain the same level of funding, but we know going in we’ve got a gap to close in some way.”

Jenkins added he assumed Bracy wanted to put this on the commissioners radar because it was likely school officials were going to be asking the county to help close that gap.

Later in the meeting, Assistant Superintendent Phil Matthews said the transportation budget was also going to be effected by the cuts, particularly activity buses.

Commission Chairwoman Fannie Greene said the two boards needed to learn to work together in regards to budget restraints.

She suggested the board talk about that plan of action in the next meeting.

“This has been an ongoing situation with the Board of Education for years and that’s the bonuses,” he said. “I’m sure that if you go in and touch those bonuses you’re going to lose some people.”

Jenkins read from a report compiled by County Attorney Charles Vaughan, who used the county’s copy of the budget. Jenkins said only $20,689 was designated in the budget to use for teacher supplements. He added there was $201,878 remaining identified as supplemental pay, but there was no designation as to where it went to.

“It would depend on the coding,” said Holloway.

School officials said those figures the county had were incorrect.

Carter questioned Jenkins where the information for the report came from. Jenkins said Vaughan used the schools’ local budget to compile the report.

Holloway said the county was looking at the May 2 budget sent to the commissioners.

“We had identified and pulled a lot of money, we looked at several options to balance the budget,” Holloway said. “In doing so we looked at reducing the supplement by one percent, two percent and things of that nature. The thing that you saw reflects money that was put in a Central Office code so that it could be easily moved to other places.”

Board of Education Chairman Donald Johnson said the school district has 127 teachers and each teacher, based upon their years of experience, receives a certain percentage of their salary as their bonus or supplement.

Board of Education member Erica Smith-Ingram noted there is a difference between supplements and bonuses.

“Without supplements it is going to be very hard to recruit and retain high quality teachers, which are necessary in a school system, it goes hand-in-hand with economic development,” she said.

Games may be on the move

Games are being moved for the second straight week due to Hurricane Irene. Game of the Week Rocky Mount at... read more