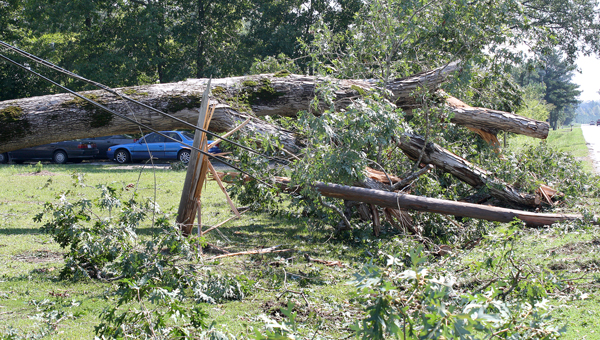 Crews restoring electrical service to thousands impacted by Hurricane Irene are facing all types of challenges, including this one west of Sunbury on US 158 where a toppled tree took out the power lines and power pole. Staff Photo by Cal Bryant

A small army of repair crews are spread out over eastern ‘Carolina, all working in an effort to return electrical power to thousands without service after Hurricane Irene.

According to information from Roanoke Electric Cooperative, based in Ahoskie, by the end of the work day on Tuesday crews have restored power to over 60 percent of its members impacted by the storm.

The crews made significant progress energizing many primary circuits coming directly out of substations as well as some secondary lines on the system.  The crews are working to clear the remaining larger individual outages affecting as many as 50 to 500 members, then will place their focus on the many scattered individual outages  across the system.

An interactive map on the company’s new website (the direct link to that web page is www. outage.roanokeelectric.com/) displays the cooperative’s service restoration efforts. Viewers will be able to see the parts of the REC service area affected by events causing outages and track the progress as well. The restoration update includes which roads or streets are affected as well as the number of co-op members in that area still without power.

“Overall our members have been very helpful by doing things such as pulling our vehicles that may be stuck with tractors, bringing food and drinks to the guys, and assisting with moving debris,” said Billy Yates, REC’s  construction supervisor.

REC officials feel very positive about meeting their original goal of restoring all services by Friday and should be very close to having it all done by Thursday barring any extreme situations.

Roanoke Electric members should make sure they have their electric cooperative’s outage number available especially if their neighbor’s service has been restored. Members can report an outage 24 hours a day, seven days a week by calling 1-800-358-9437.

As of late Tuesday evening, service has been restored to 70 percent of Dominion Power customers in North Carolina and Virginia affected by Hurricane Irene.

Nearly all customers in the remaining areas, which suffered the most extreme damage, will have their electric service restored by the end of the day Saturday.

“We are working to help ensure that our customers have power for the Labor Day weekend, said Rodney Blevins, vice president of distribution operations for Dominion Virginia Power and Dominion North Carolina Power.

He added, “The damage caused by Irene was widespread.  Trees and limbs brought down power lines and poles, and storm debris and flooding made it difficult to reach some work areas. The Irene restoration effort is the company’s second largest in its history, behind only Hurricane Isabel from 2003, when 1.8 million customers were affected and restoration took two weeks.”

More than 6,000 people are helping restore power, including more than 2,000 workers from utilities in Alabama, Georgia, Indiana, Ohio, Kentucky, Michigan, North Carolina and South Carolina.  An additional 800 workers arrived Tuesday and bring the total number of bucket trucks on the job to 1,100.

Updates on Dominion’s restoration effort are available by calling 1-866-DOM-HELP.