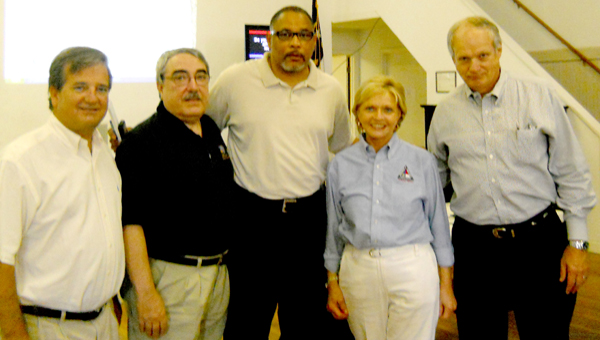 WINDSOR – North Carolina Governor Bev Perdue made another trip to Bertie County Monday, and once again it was not a happy occasion.

Perdue has been in office since 2009 and has made three trips to Bertie County to tour devastation. She came in October last year to see flooding in Windsor, came back to Colerain and Askewville in April after the spring tornadoes, and then returned Monday to see the damages from Hurricane Irene.

Bertie County Commission Chairman L.C. Hoggard III, Windsor Mayor Jimmy Hoggard and others met with Perdue and as Rep. G.K. Butterfield to discuss the current situation in the county.

The governor heard reports about the storm, including the fact that three shelters were opened and that approximately 150 citizens availed themselves of the facilities. They were closed Saturday because everyone returned to their homes.

A total of 40 homes and 10 businesses were damaged in the storm and there are still more than 5,400 people without electricity in Bertie County.

In addition, Hoggard shared information about extensive crop losses in the county, the value of which is already estimated at more than $17 million.

Gov. Perdue said she appreciated of the efforts put forth by everyone in Bertie County and felt like the work had been excellent.

In addition, she offered the assistance of her office in helping with any area in which the county had issues.

Following the brief stop at the Bertie County Council on Aging, the governor and Rep. Butterfield were taken on a tour of the region.

Damages exceed half a million in Bertie Co.

WINDSOR – Clean up is going well in Bertie County, but the cost of Hurricane Irene could be devastating. Bertie... read more