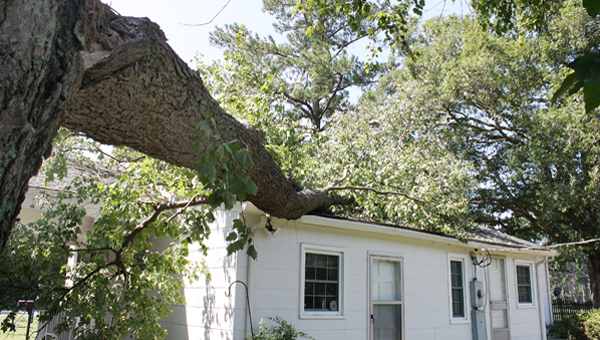 A tree limb fell on a house located at 620 US 158 East. A survey by the Sunbury Volunteer Fire Department determined that it didn’t appear the fallen limb punctured the roof. Staff Photo by Cal Bryant

They were praying elsewhere.

Empty churches throughout Gates County on Sunday morning served as a reminder of the power of Mother Nature. The loss of electricity, thanks to trees crashing into power lines after succumbing to the strong winds of Hurricane Irene, canceled church services throughout the county.

However, what Irene failed to accomplish was to break the spirit of those that make Gates County their home.

As is normally the case in times of natural disaster, volunteerism increases. Such was the case on Saturday and Sunday in Gates County where, first, the volunteer fire departments worked their respective districts to provide assistance to those in need. At dawn’s first light on Sunday, those same volunteer firefighters were out, performing the initial assessment of damage.

No damage reviews were performed Saturday, as the storm was still rearing its ugly heels as well as roads and property being littered with downed trees and power lines. Gates County Emergency Management Director Billy Winn said it appears there are no cases of significant structural damage suffered in the county. He did say that some did suffer water damage due to roofs compromised during the storm.

“Our complete damage assessment team (county building inspector and representatives from the tax office) will go out on Monday,” Winn said. “If we happen to meet some pre-set financial threshold in regards to the dollar amount of damage, then the state will bring in their damage assessment team and FEMA would follow that.”

At 7 a.m. on Sunday, the county’s volunteer firemen began to spread out over their districts to provide EOC with preliminary damage assessments. Those firemen also joined with DOT to begin the process of clearing roadways of storm debris.

“Clearing the fallen trees that are entangled with power lines was handled on a case-by-case basis by the power companies,” Winn said.

The county’s storm shelter, which opened on Saturday, closed on Sunday.

Irene left roughly 4,800 county residences/businesses without power. There were some isolated spots that were fortunate not to lose electrical service during the storm, particularly in the Hobbsville district and some of the Gates area.

“It does not appear to me that we will need long-term recovery here in the county,” Winn stated. “If we see that becomes a need on an individual basis over the coming days, we will coordinate that with North Carolina volunteer organizations that typically respond to disasters.”

Winn added that the county’s five convenience sites would be accepting vegetative storm debris as well as some housing debris (small amounts of shingles, siding, wood, etc.) Those sites were scheduled to add containers on Monday to handle the expected volume of incoming debris.

“It does not appear that we’ll need a large scale debris site, as we did following Hurricane Isabel (2003),” Winn noted.

Winn said that while Hurricane Irene did present some challenges, he would rank it as a “2 or a 3” on a scale from 1-to-10.

“The main challenge was the length of time we were under the gun from Irene,” Winn said. “It appeared that around 5 p.m. (on Saturday) it was all over; people were getting antsy and wanted to leave the (storm) shelter and get out on the road,” Winn said. “Then it went crazy. The most damage we received from the storm was between 8 p.m. (Saturday) and 2 a.m. (Sunday) after the wind shifted to the west. We got a lot of damage on the back side of this storm.”

Winn said there were some motorists stranded due to the storm.

“We sent crews to assist them, but we basically stopped any non-essential services around noon on Saturday for safety reasons,” Winn stated.

There was only one injury in the county, but that was not a direct result of the storm. A person was injured while boarding up his house. The extent of that injury did not require EMS assistance.

“We did have some residents who were unable to get out of their driveways due to fallen trees and power lines blocking their path,” Winn said. “We are hoping that some of the good people here in Gates County will volunteer to come out and help their neighbors in these type cases.”

Heavy rains from Irene did flood county roadways. Savage Road near Corapeake was completely blocked due to several feet of water. Other low lying areas that typically flood during a heavy rain also saw their fair share of water as a result of Irene.

Getting back to normal in Gates County hinged on when electrical power is restored. For the county seat in Gatesville, that occurred at around 7:15 p.m. Sunday.

“There may be some isolated areas of town that are still without power due to a problem with power lines tangled in tree limbs, but all of our county office buildings were up and running on Monday,” Gates County Manager Toby Chappell said.

Exactly when the entire county will see the power back on is an unknown.

“Some had their electrical powered restored on Sunday and Monday; others may have to wait until later in the week,” Chappell noted.

Of those without power on Sunday, 2,314 are Dominion Power customers while 2,568 are members of Roanoke Electric Cooperative.

Gates County Sheriff Ed Webb said the curfew imposed as part of the county’s state of emergency seemed to help keep a lot of citizens off the roads. That curfew (10 p.m. – 6 p.m.) was in effect on Saturday through Monday morning.

“We made a few (traffic) stops and reminded those drivers that the curfew was for their safety,” Webb said. “It was hard to see downed trees and power lines in the dark of night.

“Everybody seemed to have fared well across the county,” Webb added. “I need to thank the Highway Patrol and the Forest Service for their help. Having those guys around is always a plus for my department. I also need to thank our volunteer fire departments and the county’s rescue squad. They began to stage in advance of the storm and did a great job in their preparation to help our citizens and our visitors in need. They spent the night away from their families, staying at the fire stations and were ready to respond on a moment’s notice.”

“We’ve had a wonderful group to work together in the EOC through this storm and afterwards,” Winn stressed. “This is the first time we’ve had the Highway Patrol involved in our EOC, it was a great benefit to have them onboard.”

Winds in the county during the height of the storm were 60 mph. There was one gust that knocked down Sheriff Webb as he was assisting a stranded motorist.

Approximately nine inches of rain fell. There was one spot as high as 10 inches in the Corapeake area.

A power pole near Conway snapped in Irene’s high winds. Staff Photo by Amanda VanDerBroek “When will the power come... read more